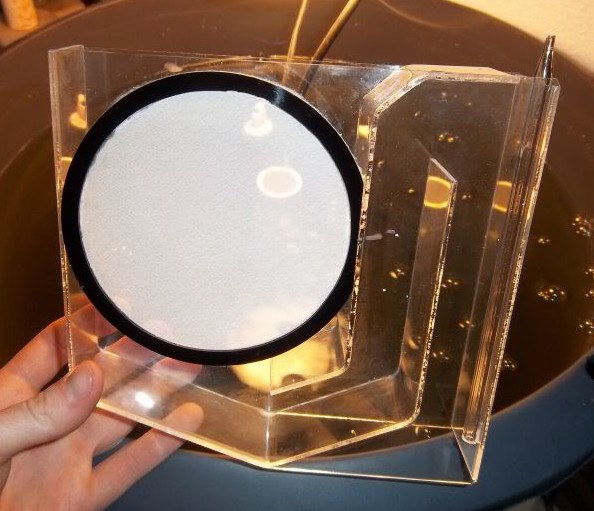 The latest iteration of the Vossen Larval Fish Trap.


The Vossen Larval Fish Trap was born out of necessity — the need to capture larval fish post-hatch in an easy way that would allow high survival rates after capture.

A very early DIY larval trap was published by April Kirkendoll in her book “How to Raise and Train Your Peppermint Shrimp.” In the book, April explains how to build the simple trap out of a 2-liter bottle, some PVC pipe, fine-mesh screen material, a low powered flashlight, and an air pump (seen at right).  To use the trap, a flashlight was positioned at the bottom of the left pipe and an air pump was used to deliver a stream of bubbles into the left pipe. This upflow of air drew water up into the pipe and any larvae along with it. They then traveled through the pipe into the 2-liter bottle. Water flowed out of the 2-liter bottle through a fine mesh material keeping the larvae inside the 2-liter until it was time to transfer them to the larval rearing tank. It was very crude, but it worked.

Fast forward six years to 2008 when the discussion turned to using the above trap at the Marine Ornamental Fish & Invertebrate Breeders forum (Mofib). Chad Vossen read the thread and decided to make a much nicer version out of acrylic and make it mountable on the side of the tank. Ever since then he has sold his traps to breeders as far away as Australia that need a simple solution to an all too common problem.

Chad’s larval traps work identical to the 2-liter / PVC version but in a much nicer and more compact format (seen above). It measures roughly 6.5″ x 7″ x 1.5″ thick and is made out of clear acrylic. I was able to check a couple of them out at the 2012 Marine Breeding Initiative Workshop in Detroit, Michigan earlier this year and they are definitely well thought out and built.

Front, side, and rear view of a Larval Fish Trap showing the airlift and LED light source.

The user hangs the trap inside his or her breeding tank and attaches an air pump to the air lift tube on the right side of the trap.  A small LED light is then mounted to the outside of the tank just below the trap opening. After lights-out, hatched larvae are attracted to the light source and are sucked into the large chamber where they slowly circulated much like flow in a kriesel aquarium.  The next morning, the user can transfer the larvae to rearing tanks.  No muss, no fuss.

Chad is currently selling his Larval Fish Trap for $35 plus shipping. If you are interested in one, contact him over at the Mofib (http://www.marinebreeder.org/phpbb/viewtopic.php?f=232&t=7104) or email him at Vossen_2012@yahoo.com.  Chad has also setup a Facebook page where he is periodically posting updates about his product.