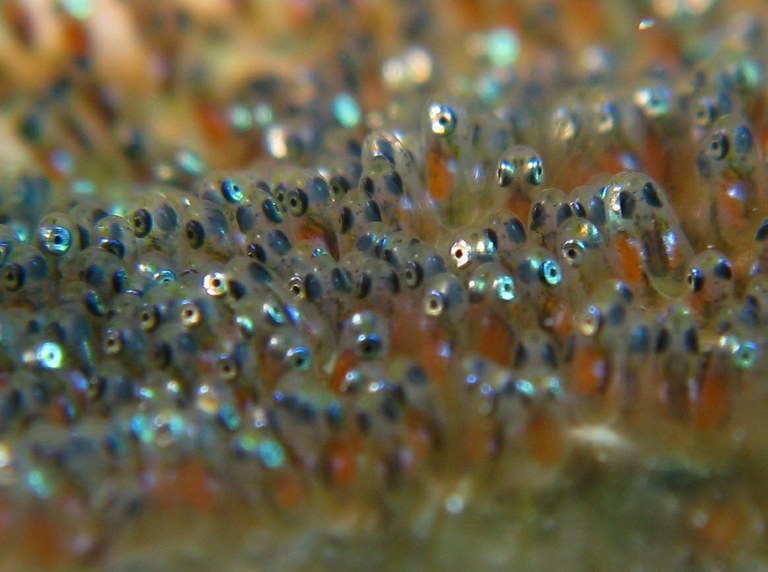 Twenty percent of these soon-to-hatch reef fish could find their way back home.

Fish larvae on the Great Barrier Reef can find their way home after weeks of drifting in the sea even where the currents are strong, thanks to their senses of smell and hearing, two James Cook University researchers have found.

JCU Professors Eric Wolanski and Mike Kingsford published their findings in their paper, Oceanographic and behavioural assumptions in models of the fate of coral and coral reef fish larvae.

The paper has been published in the Journal of the Royal Society Interface, a journal that aims to link physics and biology.

Professor Wolanski, from TropWATER and the School of Marine and Tropical Biology, said fish larvae showed they used the two senses to find their way home.

“Knowing that these larvae can orientate and swim to reefs using the senses of smell and hearing, we demonstrated with modelling that 20 per cent of these actively swimming fish larvae can return,” he said.

“This is compared to less than two per cent for passively drifting coral larvae.

Professor Wolanski explained that after hatching, fish larvae cannot swim and are dispersed by ocean currents.

However, when the larvae have grown a dorsal bone, they can swim.

“They have a well-developed sense of smell, as revealed by experiments, and they swim horizontally using the smell cue towards home, that is, the reef where they were spawned,” he said.

“The fish larvae can also hear, and experiments have shown that they also swim to the sounds of life on the reef.”

Professor Wolanski said it was important that they return to their natal (or home) reef.

“If they don’t, the population will die because initially the fish larvae are moved away by the currents from their natal reefs. To maintain the population, some larvae must come back.”

The findings came after researchers developed a predictive model to find out what the fish and coral larvae were doing.

“The two senses can maximise the chances that they come back to the natal reef – the smell makes them come back in the general direction and, when they get close enough, the sound gives them a precise bearing,” he said.

“However for those larvae that have drifted too far away from the natal reef and can’t come back, they are not necessarily going to be lost at sea and die. If they come within hearing distance – one to two kilometres – of another reef, they can swim to it. This is how MPAs help replenish fish in fished areas.”

“It shows that a large number of coral reef fish larvae from an MPA are dispersed away by oceanic currents, but these larvae are not necessarily lost at sea and bound to die; using sound, these larvae can recruit in large numbers to reefs outside of the MPAs. In other words, MPAs help replenish fish stocks in fished areas.”

The research paper can be read at: http://rsif.royalsocietypublishing.org/content/11/98/20140209.short