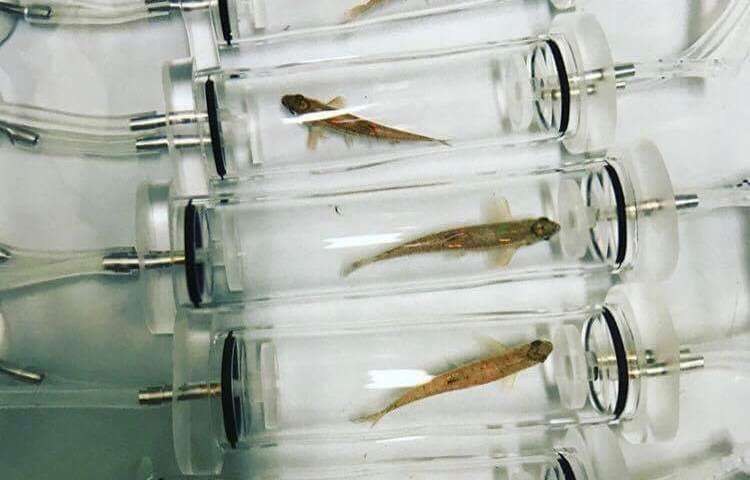 
From the Society for Experimental Biology:

Just like humans, many fish like to surround themselves with active companions — but frisky friends also make for fierce competition. New research from PhD student, Ms Anna Persson, and a team of researchers from the University of Glasgow, UK reveals that minnows would rather swim with their most active friends, even if they pose more of a threat.

Ms Persson and her team believe that the fish might be attracted to more active shoalmates as they appear more visually stimulating, which could be increasing their attractiveness to other fish, but they hope to further investigate the possible reasons for these preferences.

Ms Persson hopes that this research highlights the importance of non-visual factors in group preferences: “Previous research has shown that fish display shoaling preferences based on visual traits such as body size and colouration, but it is also important to examine the role of metabolic rate on group living preferences.”

The metabolic rate of an animal has a large influence on its behaviour and can affect their ability to search for food and avoid predators. “Higher metabolic rates are known to be more associated with bolder behaviours such as exploration, which could mean they are more successful at finding food, but also more at risk of being predated,” says Ms Persson.

While it seems counter-intuitive to swim with metabolically superior fish, Ms Persson says that less active fish might actually benefit from swimming with more energised swimmers, by swimming in their wake and gaining an energy-saving hydrodynamic boost, while possibly being less at risk of being eaten by predators.

Ms Persson’s research also highlights the ecological and environmental implications of metabolic influences. “Fish that shoal with a certain group are perhaps more likely to mate within that group, which can drive evolutionary selection pressures,” explains Ms Persson, “it is also important to understand the factors affecting collective behaviour and how these might be affected by climate change.”

To compare differences in metabolic rate between fish, the team used respirometry to measure oxygen consumption and separated the fish into groups depending on their metabolic rate and body size. They observe which groups prove to be more popular with single fish and produce heat maps that track where the single fish moves to.