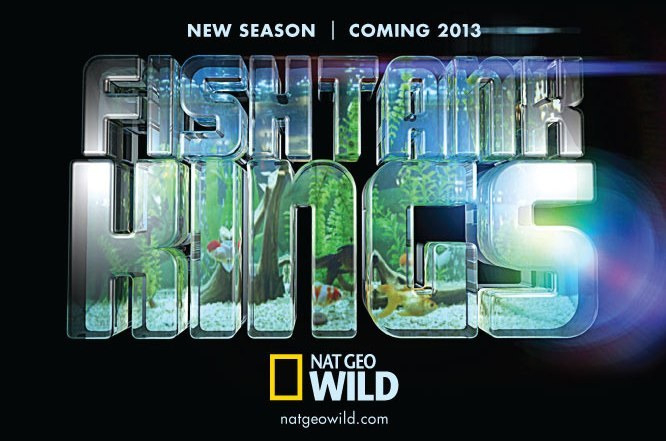 (WASHINGTON, D.C. – May 6, 2013) Let your creativity go WILD! Fish tanks may not be in every household, but they certainly are works of art in high demand. Nat Geo WILD’s popular series Fish Tank Kings returns for a second season beginning Saturday, June 1, at 9 PM ET/PT, taking viewers to the center of the action as the Florida-based aquarium specialists at Living Color use their unparalleled skills, creativity and teamwork to pull off the most extreme tanks. (For more information, visit www.natgeowild.com/fishtankkings and follow us on Twitter at twitter.com/NGC_PR.)

Summer heats up as season two brings not only new clients and challenges, but also a whole new set of jaw-dropping aquariums. We’ll join Mat, the “boss”; John, the “engineer”; Ben, the “project manager”; Krusty, the “builder”; Francis, the “fish geek”; and Jose, the “designer”; as they take on larger projects that bring us closer to various marine life not easily accessible, including the giant Pacific octopus, snakehead fish, mermaid’s purse, pufferfish, black tip reef sharks and lionfish. Dream as big as you like, and the Fish Tank Kings are at your service to create a custom fish tank. Any shape or size, we got the hook-up!

This season, the guys go bigger and bolder than ever, taking on extreme projects that have never before been attempted before. The team will bring together their unmatched aquatic knowledge with design and expertise to create the most innovative fish tanks, including an aquarium built out of a Volkswagen minibus, a fireplace surrounded by a tank and an impressive 4,000-pound aquatic dream tank. Our cameras will follow the guys from the inception of a design to selecting fish to choosing the reefs and corals. Being there for every reveal, we’ll see clients change their minds 10 times in the process while displays are artistically created.

In addition to building some of the most astonishing tanks, the Fish Tank Kings also swim to the depths of the oceans to get as close to underwater fish and coral as possible to replicate the most accurate-looking coral for tanks. Come along as the guys go diving in the depths of south Florida waters to search for marine life. It’s a fishy job, but somebody’s gotta do it!

Thinking outside the box is at the top of the team’s minds when they are faced with the most complicated job ever — transforming a vintage Volkswagen Minibus into a fish tank for a local car dealer. The years have not been kind to this iconic hippie van, strapped with a questionable structural integrity. Engineering a tank that will weigh 4,000 pounds when filled with saltwater and fish is the

craziest and hardest task they have attempted so far. With a tight deadline looming, the team has a likely disaster on its hands. Will they shatter under pressure? Back at headquarters, fish geek Francis is looking for an assistant, but whoever he decides to hire, there’s no guarantee they’ll be up to the rigorous work schedule or mesh with the guys — all of whom are known for their strong personalities. He puts potential candidate Heather to the test by giving her a quiz on fish species, having her Go On a deep-sea dive and having her perform a risky surgical procedure on a venomous fish. Will she be able to hold her own?

Restoring a 25,000-gallon tank is no easy task, but the Fish Tank Kings are up to the challenge. The Gumbo Limbo Nature Center, an educational facility and rehab center for sea turtles, has commissioned the guys to help bring their showcase aquarium back into the aquatic oasis it once was. For the crew to pull it off, they’ll have to create a seascape that mirrors a sea turtle’s natural habitat. The obstacles only intensify during the installation as the tank’s marine life, including sharks and stingrays cannot be removed from the premises. The only way to pull off this job is for someone to go swimming with the carnivores, but there aren’t many volunteers! Then the guys are up against one tough client, Lisa, who wants three tanks in one, completed in a fraction of the time the crew allots for such complex projects. When Francis hands The Job over to his assistant Heather, the team fears they may lose The Job. But Heather is trained, eager and ready to have a project she can call her own, until she finds out she’ll be catching her least favorite marine animals — lobsters. Will she succeed?

Although Ben is a great project manager, Mat has noticed he has gotten a bit too comfortable behind his desk. To shake things up, Mat assigns Ben The Job of installing a pair of outsized fish tanks around a fireplace at a private residence in Orlando. What seems like an ordinary job to the rest of the Living Color team proves to be quite the challenge for Ben, as he has to hone both his client relations and physical skills on the fly. If he can’t pull it off, it will jeopardize the company’s reputation and make it impossible for the family to move into their home. Meanwhile, Mat leaves South Florida for Chicago to work on a terrarium, a habitat filled with plants, for a colorful amphibian known as the Panamanian Golden Frog. Although their color resembles that of the valuable metal, it’s their numbers that make them truly precious, as this is a rare animal on the brink of extinction. If the tank isn’t perfect, the very survival of the species could be at risk.