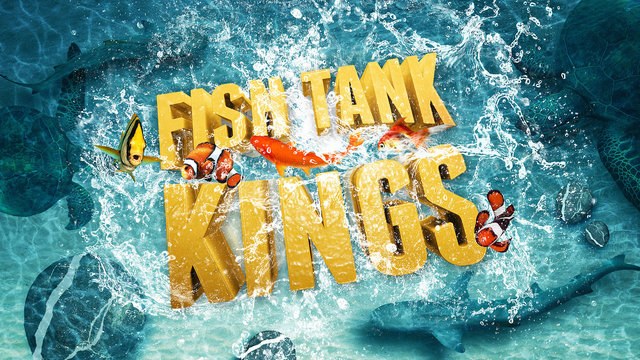 (WASHINGTON, D.C. – April 1, 2014) The dynamic “school” of aquarium specialists at Living Color in southern Florida are experts at fulfilling the wild aquatic requests of their fish-loving clientele. Last season they made a “splash” transforming a Volkswagen Minibus into an aquarium and building a fireplace around a fish tank. This spring, Nat Geo WILD “hooks up” once again with the Fish Tank Kings for an all-new season of custom-built tanks that seem to defy imagination. The new season of Fish Tank Kings premieres Monday, April 28, at 9 p.m. ET/PT on Nat Geo WILD. (For more information, visit www.natgeowild.com/fishtankkings and follow us on Twitter at twitter.com/NGC_PR.)

Each episode follows the dedicated team as they work to create some of the most impressive fish tanks ever developed: Mat Roy is the president and is responsible for overseeing all projects and running operations at Living Color. His favorite part of the process is seeing the look on clients’ faces as they view their aquarium for the first time. Francis Yupangco is a lifelong fish geek and marine life specialist. Jose Blanco and Ben Alia oversee construction and creative designs for the tanks. John Manning is the life support system designer, responsible for creating intricate systems in small spaces that will ultimately keep the exotic creatures inside the tank healthy.

Going bigger and bolder than ever before, the guys “reel in” a new “haul” of extreme projects that range from our very own Dog Whisperer Cesar Millan’s aquatic oasis in the middle of the California desert to a pimped-out octopus exhibit at a New York zoo, and the largest private aquarium in South Florida. Being there for every reveal, we’ll see clients change their minds 10 times in the process while displays are artistically created.
In addition to building some of the most astonishing tanks out there, the Fish Tank Kings also swim to the depths of the oceans to meet their clients’ needs. Our cameras plunge into open waters to see how they expertly retrieve deadly and exotic sea creatures — from the giant Pacific octopus, to an elusive pair of fish that mate for life and a deadly nocturnal fish with a venomous spine. It’s a fishy job, but somebody’s gotta do it!

Fish Tank Kings: Shark Tank
Monday, April 28, at 9 p.m. ET/PT
Can the Fish Tank Kings transform a second-floor office space into South Florida’s largest privately owned fish tank? A lifelong fish enthusiast envisions a 5,000-gallon Shark Tank that would take up half the square footage in his office and the only way to install such a monstrosity is through a second-floor window! The guys at Living Color are always up for a challenge, but this request is a particularly tall order. Then, the Rosamond Gifford Zoo in Syracuse, N.Y., commissions Francis to design, build and install a new Pacific octopus exhibit … oh, and they also need him to dive deep into the frigid waters off Vancouver to retrieve their eight-armed star attraction.

Fish Tank Kings: Secret Crystal Cave Fish Palace
Monday, May 5, at 9 p.m. ET/PT
The team at Living Color is forced to think outside of the box, and outside of the tank, to meet the high-end expectations of South Florida’s famous PB Catch restaurant. Owner Thierry Beaud doesn’t want coral, he wants crystals. Instead of intricacy, he wants simplicity. By requesting such foreign elements, this job requires endless amounts of trial and error on both the technical and design fronts. Then, the Fish Tank Kings are tasked with designing a Paris-themed aquarium that will impress the likes of Madonna and Justin Timberlake. The owners of Obie One Recording Studio don’t provide many guidelines on The Job, but one thing is for sure … this tank had better be worthy of music royalty.

Fish Tank Kings: The Fish Whisperer
Monday, May 12, at 9 p.m. ET/PT
Nat Geo WILD’s very own Dog Whisperer, Cesar Millan, recruits the Fish Tank Kings to build an aquatic oasis at his Dog Psychology Center in the California desert. This is no ordinary aquarium project — Cesar wants a massive koi fishpond where there is no viable water source for miles! While Mat and Jose struggle with water complications, Francis heads to Alabama to noodle the catfish needed to keep the koi from overpopulating the pond. As problems mount on the West Coast, the staff back in Florida are tasked with their own challenge: designing a tank so elaborate it will trick the client into thinking the whole house was built around it. This is an enormous task that will require an aquarium to be molded, constructed and installed with pinpoint accuracy.
Fish Tank Kings is produced by Sharp Entertainment for Nat Geo WILD. For Sharp Entertainment, Matt Sharp, Dan Adler, Bob Larson and Matthew Blaine are executive producers. For Nat Geo WILD, executive producer is Jenny Apostol, senior vice president of production and development is Janet Han Vissering and general manager is Geoff Daniels.