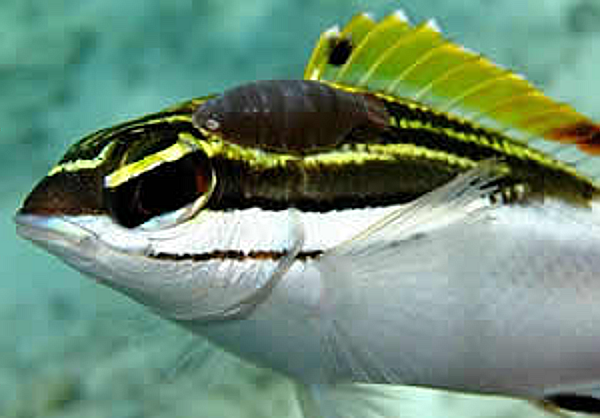 A parasite attached to a bream. Photo by Dominique Roche.


A preference for one side is called lateralization. Many human behaviors, such as being left-or right-handed when writing, are lateralized due to the body’s asymmetries and different wiring in the brain’s hemispheres.

“In addition to humans, many animals show lateralization, including the bridled monocle bream we used in this study,” said lead author of the paper, Mr Dominique Roche, a PhD candidate in the ANU Research School of Biology.

“There has been some evidence that lateralization is plastic, meaning it can change depending on the circumstances. For example, history has shown that some people born left-handed can become very adept at writing with their right hand if forced to do so in school. In fact, they often become more comfortable using their right hand in the long run.”

The bridled monocle bream is often parasitized by a large crustacean which attaches itself to one side of the fish’s head, just above the eye.

“We were interested in testing whether the ecological interaction of having this parasite attached to the fish’s head had any influence on lateralization and whether it was changeable,” said Ms Sandra Binning, who collaborated with Mr Roche on the study.

The team caught bream with and without parasites from Lizard Island on the Great Barrier Reef and swam the fish in a maze that resembles a T-intersection, which forced the fish to choose to turn left or right.

“The population as a whole didn’t show a preference to turn one way or the other,” said Mr Roche. “However, at an individual level, some fish showed a turning preference, with parasitized fish showing a much stronger preference than their unparasitized counterparts. If they have a parasite, they definitely choose a side.”

When the parasite was removed, turning preference became much less pronounced, returning to the level of the unparasitized population.

“This is one of the first instances where lateralisation has been shown to be plastic and change so rapidly,” said Mr Roche.

“Having a preferred side gives the fish an advantage. Lateralized fish are quicker at responding to threats. We’ve shown previously that parasitized fish swim slower than unparasitized fish. Given that our parasitized fish don’t swim very fast, it makes sense that they need to react faster to predators to give themselves a head start and have a better chance of escaping.”

Interestingly, not all fish react the same to their parasite – some showed a preference to turn towards and some preferred to turn away.

“This is a good thing – the parasites are quite big and a predator could spot them easily,” said Ms Binning. “If all parasitized fish always turned towards their parasite, eventually predators would be able to anticipate their reaction, and parasitized fish would lose the advantage of reacting quickly.”

“This is a really exciting and interesting result,” said Mr Roche. “Fish are vertebrates like us, and determining whether important behaviors like turning can change ultimately helps us better understand humans and whether our own preference for using the right or left side of our body is plastic depending on circumstances and the environment around us.”

The research is published in the journal Behavioural Ecology and Sociobiology.