To better understand the article below, first watch these two entertaining and education videos by youtube channel Smarter Every Day about how modern fishes’ mouths work (it’s amazing):

From ARC Centre of Excellence for Coral Reef Studies:

A Long Look Back at Fishes’ Extendable Jaws

When it comes to catching elusive prey, many fishes rely on a special trick: protruding jaws that quickly extend their reach to snap up that next meal. Now, researchers have found a clever way to trace the evolution of jaw protrusion in fishes over many millions of years.

The evidence suggests that fishes’ jaw protrusion skill is relatively new, appearing only in the last 100 million years of their 400-million-year history.

“We take it for granted that all fishes can snap up elusive prey,” says David Bellwood from the ARC Centre of Excellence for Coral Reef Studies at James Cook University. “But it wasn’t like that millions of years ago.”

Based on a careful analysis of the jaws of 60 living fish species, the researchers developed a method to predict a fish’s jaw protrusion ability based on a simple anatomical measurement. It was suddenly possible to predict jaw protrusion in long-lost fishes of the ancient past.

“We knew that most [modern] fishes could protrude their jaws,” explains Christopher Goatley, co-author of the study, also at James Cook University. “The question was, when did this ability arise, and what anatomical features were required for protrusion?”

The researchers discovered that “one simple measurement of one jawbone explained almost everything. With this we could predict how fishes feed today and how they are likely to have fed in the past, over the last 400 million years.”

The findings suggest that this characteristic may have played an important role in the success of the spiny-rayed fishes—now the dominant fish clade in modern oceans, the researchers say. Those extendable, protruding jaws also made prey species more vulnerable to attack. That might explain why many crustaceans today are so small.

“We think [that] over evolutionary time this drove prey to hide by becoming smaller, nocturnal, or hiding in holes,” Bellwood says. “Today the average crustacean on a coral reef is less than a millimeter long. This may be a consequence of increasing predation pressure.”

Bellwood says this is just the beginning of an in-depth look into fish feeding and the dynamics between fish and their prey in a changing environment.

“There have been major changes in the abilities of fish to feed over time,” Bellwood says. “The key to understanding this history is in the workings of a fish’s head.” 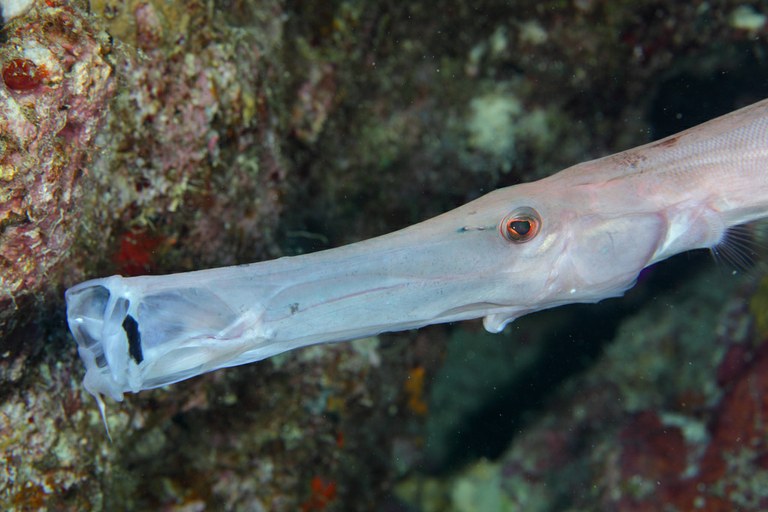 A great example of a fish’s extendable jaw. Photo by Klaus Stiefel