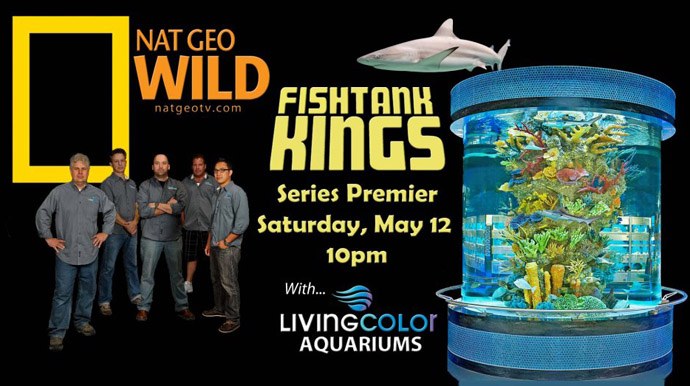 
Living Color Aquariums has shared many of their amazing tank builds with Advanced Aquarist readers, and soon the rest of the world will get to see their work on television.  The first episode of “Fishtank Kings” premieres Saturday, May 12, 2012 at 10pm on the Nat Geo TV network.  The new show will showcase builds from private and public aquariums as well as aquaculture facilities.

NatGeoTV.com has provided Advanced Aquarist with the press release for “Fishtank Kings.”

THERE ARE NEW FISH KINGS IN THE WATERS

(WASHINGTON, D.C. – April 10, 2012) More than 1,000 fish swim around a 15-ft. tall acrylic cylinder that rises from the floor of a movie star’s Beverly Hills foyer.  In a high-rise NYC condo, a young CEO has a 5,000-gallon fish tank installed in his floor so that on his way to the bathroom he can literally walk on water.  A rock star in Miami has exotic fish follow him all over his mega-mansion, thanks to the fish superhighway that connects three massive tanks together on three different floors.  Extreme fish aquariums have become the ultimate status symbol, and the people who are on the cutting edge are in high demand.  The series highlights the science of aquarium keeping and takes you behind the scenes look into several of the country’s most prestigious public aquariums and aquaculture facilities.

Nat Geo WILD’s new six-episode series Fish Tank Kings, premiering Saturday, May 12, at 10 PM ET/PT, dives into the demanding, pressure-filled job of pulling off these massive underwater creations.  Fish Tank Kings follows the Florida-based aquarium specialists at Living Color as they use their unparalleled skills, creativity and teamwork to pull off the most extreme of these tanks, where the drama and pressure of the building process is nowhere as serene as the final product.

Fish Tank Kings boasts a cast of thousands of fish — from the giant Pacific octopus and rare captive-bred porkfish to blacktip reef sharks and lionfish.  From selecting the fishes to choosing the reefs and corals, clients will change their mind 10 times in the process.  Acrylic will be formed and displays will be artistically created, and we’ll be there for every reveal.

Each episode follows the dedicated team as they work to create some of the most impressive fish tanks ever developed: Mat Roy is the president and is responsible for overseeing all projects and running operations at Living Color.  His favorite part of the process is seeing the look on clients’ faces as they view their aquarium for the first time.  Francis Yupangco, lifelong fish geek, is the head marine biologist, overseeing the construction and marine life in the custom tanks.  Ben Alia is the senior project manager, whose expertise allows the team to fabricate the most sophisticated of designs.  Jose Blanco is production and safety manager, planning and creating a happy home for the fish.  John Manning is life support system designer, responsible for creating intricate systems in small spaces that will ultimately keep the exotic creatures inside the tank healthy.

Mat is beside himself with excitement at the possibility of creating fish tanks for a one-of-a-kind location — the home plate backstop of the brand-new Marlins baseball stadium!  The MLB believes that this aquarium cannot be done, and Living Color is set to prove them wrong.  With Miami Marlins President David Samson breathing down their necks, the Living Color team comes up with a design that they hope will function as a backstop as well as keep the fish — including the rare captive-bred porkfish — from dying on the field in front of millions of Marlins fans across the country.  Meanwhile, Jose can’t get back on track with his already slammed production schedule, and an overlooked design flaw in the Marlins reefs could botch the delivery date completely.

Mat meets up with Allan Marshall, who runs the biological operations at the impressive Florida Aquarium.  After taking Mat on a tour of the incredible facilities, Allan expresses that he wants a fresh take on an old exhibit and is interested in showcasing rarely seen deep-sea fish.  Mat knows of a submarine in the Caribbean and gets Allan excited for the unique adventure.  Additionally, Mat has promised a repeat client a 3,000-gallon cylindrical shark aquarium in just three weeks!  Upon learning that they have a bunch of jobs on the dockets and one requiring a tight turnaround that has risen to top priority, the team is dismayed.  After leaving Ben in charge of the warehouse, Mat takes off to the Caribbean island of Curacao with Allan to locate some deep-sea fish for their new exhibit.  It’s crunch time, with the guys in the warehouse stretched to the limit and Mat attempting to get Allan some exquisite creatures — including the blacktip reef shark, the deepwater dragonette and the deepwater scorpion fish — to showcase.

Mat can’t wait to meet one of his sports heroes — Indy car driver Ryan Hunter Reay.  Meanwhile, at the Tennessee Aquarium, Francis meets a giant Pacific octopus suffering from harmful chemicals that have leeched into its water from a poorly constructed rock feature.  To save the octopus, Francis must turn to Jose to build all-new and 100 percent safe aquarium rocks, all while avoiding the Tank Boss, Mat, who has demanded that the warehouse work on his pet project… or else!  It’s a warehouse showdown as Mat’s pet project takes center stage while Jose is racing to save an octopus life.

Mat gets a call from a client in Sin City with a tank that has aged prematurely and after only four years is due for a major aquatic overhaul, down to needing new fish.  Per usual, Mat has taken a nosedive headfirst down the rabbit hole, promising that this rehab job can be done in one night and on location in Las Vegas.  Meanwhile, Francis is busy finding information on a nurse shark that needs to be relocated quickly, as she has outgrown her current aquarium.  While Mat and John are in Vegas, Francis and Jose will be taking on the moving of the shark, Bessie.  Time is of the essence in both of these jobs, with Living Color’s reputation hanging in the balance.

Ben and Francis head out to meet up with a previous client, Max, who is looking for a massive upgrade in a tank — he wants one three to four times the size of his current aquarium.  He already maintains a live reef tank, but this time he wants a live coral tank that will be one of the largest residential tanks of its kind in southern Florida.  Francis takes Max on a special tour of ORA, the country’s largest coral farm.  Then, it’s up to Mat and Ben to take on a new client, former Miami Heat star Alonzo Mourning.  Upon arriving at Alonzo’s home, they see he already has an aquarium.  The basketball sensation explains that he does in fact want an aquarium, but not for his home — for a youth center he started that helps at-risk youth.

Pleasing discerning clients is nothing new to Mat Roy and his team, but when he has an initial client meeting with the head of biology for the Rainforest Café, Jim Prappas, they quickly realize that in order to accomplish this job they are going to have to be on their A-game.  Meanwhile, a long-standing client, Tom Rodgers, wants a complete aquatic overhaul on his nearly decade-old tank.  In addition to replacing the current drab coral reef with a dynamic and colorful new one, Living Color’s head of marine biology, Francis, must figure out a way to give Tom the predator tank he wants without putting the other fish in jeopardy.

Sharp Entertainment is a leading voice in unscripted reality television.  Since being founded by Matt Sharp in 2003, Sharp Entertainment continues to be one of the industry’s most sought-after production companies, employing New York’s most imaginative producers, writers, and editors. Together they have created hits like Travel Channel’s “Man v Food”, TLC’s “Extreme Couponing”, and National Geographic Channel’s “Doomsday Preppers”.

Experience the best, most intimate encounters with wildlife ever seen on television. Backed by its unparalleled reputation for quality and blue-chip programming, Nat Geo Wild is dedicated to providing a unique insight into the natural world, the environment and the amazing creatures that inhabit it. From the most remote environments, to the forbidding depths of our oceans, to the protected parks on our doorsteps, Nat Geo Wild will use spectacular cinematography and compelling storytelling to take viewers on unforgettable journeys into the wild world. Launched in 2006, Nat Geo Wild is part of National Geographic Channels International (NGCI) and is available in more than 90 countries and 100 million homes. Nat Geo Wild HD launched in the UK in March 2009, and is also available in Greece, Latin America, Poland, Spain and Russia. Further expansion is expected globally. For more information, please visit www.natgeotv.com.