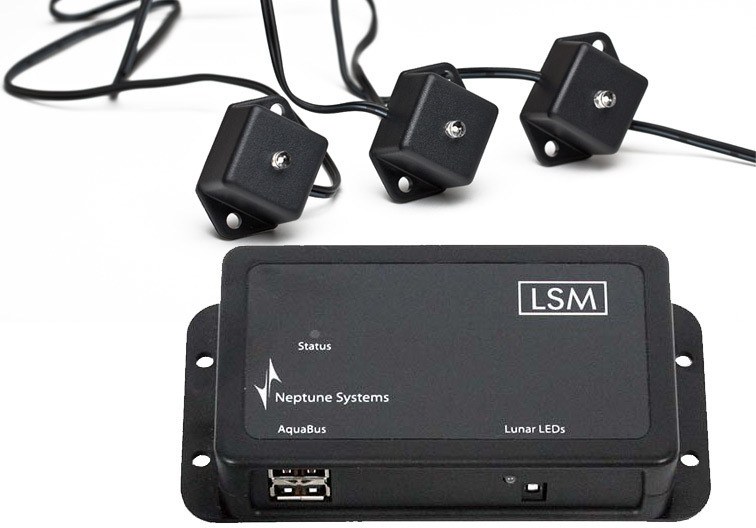 
Over the last several months, I blogged about 3D printing and how it is useful to our hobby. I showed that with a 3D printer, one can build:

Now I would like to showcase some of the things other aquarium keepers have made for their aquariums:

Thingiverse member Tracy Ireland wanted an easy way to mount his neptune Systems Aqua Controller Lunar Simulator LEDs (LSM) on an aquarium. He tried different ways of attaching it ranging from double-sided sticky tape and a couple other options but nothing really “worked” well for him so he turned to his 3D printer to print a bracket to fit the bill. The end result was a 3D printed L-bracket that he could attach to his aquarium hood with nylon screws.

Salt creep is always a problem when working with overflows, especially when overflowing multiple breeding tanks into a central filtration system.

The typical setup is to have a larger diameter central drain pipe that individual breeding aquariums drain into and then the water drains into the sump. These individual tanks have smaller overflow pipes that just sit inside a T-fitting plumbed into the larger diameter drain pipe. This makes it easy to remove the tank for maintenance but does create salt creep problems over time.

Most people will either just deal with the salt creep or will drill a schedule 80 cap and place the overflow pipe into it. However, Darren Nancarrow of Perth, Australia (aka “CaptCrash” on Thingiverse.com and the Marine Breeding Initiative forums) decided to save a bit of money and 3D print his own custom salt creep inhibiting caps. These caps split in half and fit snuggly around the overflow pipe and seat down over the larger T-fitting on the drain pipe.

There’s an interesting thread running right now on the MBI’s forums about how Darren is using these caps on his 525-gallon breeding system.

Sometimes parts are lost over time and the only thing a person can do is cobble together something or buy a replacement part either from the manufacturer or from eBay.  Or if you have a 3D printer, you can model and print a replacement part immediately.

Thingiverse member John Ridley lost a filter bearing to his Penguin Bio-Wheel 200 filter recently. Instead of buying a replacement, he printed one which just slid right into place.

Hose clamps are useful for all sorts of applications for our aquariums. Drip acclimating new fish is one example. Controlling the drip rate of a jug of kalkwasser is another.  A person could purchase hose clamps for these applications or they could just 3D print any number of them. Given that 3D prints are virtual models before they are printed, a person can scale the model larger or smaller for any size hose they need.

Angelfish will breed on a variety of surfaces. Thingiverse user Josh McCullough had a pair of angelfish that liked to spawn on their Eheim filter pipe but a “mystery fish” was eating the eggs after lights-out. He transferred the pair to a 30-gallon aquarium and fabricated a holder to hold a 1.5-inch pipe for the fish to spawn on in the center of their tank.

Bonus: A Barrel of Octopuses Game

This is one I designed and while not necessarily for your aquarium, it allows you to geek out a bit with an aquarium-themed game.

This game harkens back to the 1965 Barrel of Monkeys game originally made by Lakeside Toys (now made by Milton Bradley). Each game came with a colored barrel and twelve monkeys the same color as the barrel. The instructions of the game stated: “Dump monkeys onto table. Pick up one monkey by an arm. Hook other arm through a second monkey’s arm. Continue making a chain. Your turn is over when a monkey is dropped.”

My version uses twelve octopuses instead of monkeys and features a custom octopus graphic on both the top and bottom of the barrel. How many can you pick up?