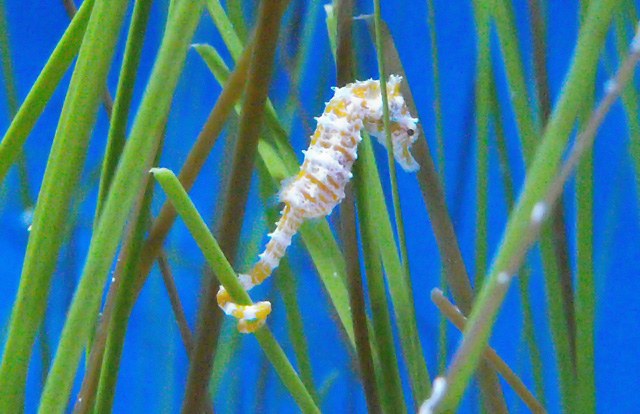 Dwarf seahorses are a popular aquarium and curio species found in the Caribbean and in many parts along Florida’s coastline. They are sought after by aquarists for their diminutive size and suitability for captive husbandry.

Since 2005, all seahorses, including dwarf seahorses (Hippocampus zosterae), are protected by CITES (Convention on International Trade in Endangered Species).  CITES, however, only governs international trade, not interstate trade within the United States.  In an effort to conserve dwarf seahorses, in 2009, the Florida Wildlife Commission (FWC) approved a regulation to limit the harvest of this species to 400 specimens per person or vessel per trip.  As a result, the annual estimated catch for dwarf seahorses declined from 44,000/year prior to 2009 to an average of 17,000/year from 2010 to 2014.

In 2011, the Center for Biological Diversity petitioned for Endangered Species Act (ESA) protection for Hippocampus zosterae.  The petition cited pressures from seagrass habitat destruction as well as the aquarium and curio trade.   In 2012 following their initial review, the NOAA Fisheries decided there was enough data to warrant further deliberation, although no final determination has yet been made.

As an indirect consequence of the impending ESA decision, FWC is now considering stricter harvest limits for Hippocampus zosterae.

The FWC staff initally recommended the following actions for the committee:

A week prior to the FWC commission meeting, NOAA provided their own recommendation to FWC staff for more aggressive conservation measures:

The original proposal (200 per trip limit, 25,000 annual quota) would not significantly impact current harvest practices; however, it will safeguard against possible future harvest expansion.  NOAA’s recommendation, on the other hand, is meant to immediately reduce harvest from current day levels.

On November 18, 2015, a motion passed (six yes to one no vote) to advertise the original proposal (limit of 200 dwarf seahorses per trip and a 25,000 annual harvest quota) for public commentary and a final determination in 2016.  Based in large part to expert testimony during the meeting, the motion excludes the proposal for seasonal closure.   The lone dissenting vote was because one commissioner felt not enough science was presented to warrant stricter regulations at this time.

None of the FWC commissioners decided to follow NOAA’s recommendation because NOAA failed to supply any data to accompany their recommendation; the commissioners emphasized the importance of making policy changes based on science, which was lacking in this case.

A final public hearing will be scheduled for February, 2016.

Having watched the two+ hour presentation and deliberation, it was evident the FWC commission sought to strike an equitable balance between conservation and economy based on the best available data.   FWC commissioners repeatedly espoused the importance of deciding policies based on science.  This is in stark contrast to some of the Hawaiian local council meetings we’ve seen in recent years.

Draft Rule – Dwarf Seahorse– The dwarf seahorse is managed as part of the Marine Life (tropical ornamental/aquarium) fishery.  NOAA fisheries has received a petition to list the dwarf seahorse under the Endangered Species Act (ESA) and is currently conducting a status review for this species.  A preliminary evaluation of FWRI’s available data suggests that the dwarf seahorse could benefit from additional conservation measures.  While harvest in Florida is already regulated, reducing and maintaining low harvest would ensure the long term viability of the species and improve the condition of the population.  The effectiveness of fishery regulations is an important factor that NOAA Fisheries would consider in determining whether the species needs federal protection under the ESA. Memo | Presentation

68B-42.0036 Closed Areas – The proposed rule would prohibit harvest of the dwarf seahorse north of a line extending due west from the Anclote Key State Park lighthouse near Tarpon Springs on the Gulf coast and north of a line extending due east of the Jupiter Inlet lighthouse in Palm Beach County on the Atlantic coast.
68B-42.005 Recreational Bag Limit, Recreational Closed Season – The proposed rule would:

68B-42.006 Commercial Season, Harvest Limits– The proposed rule would: