For a coral, the more housekeepers the better 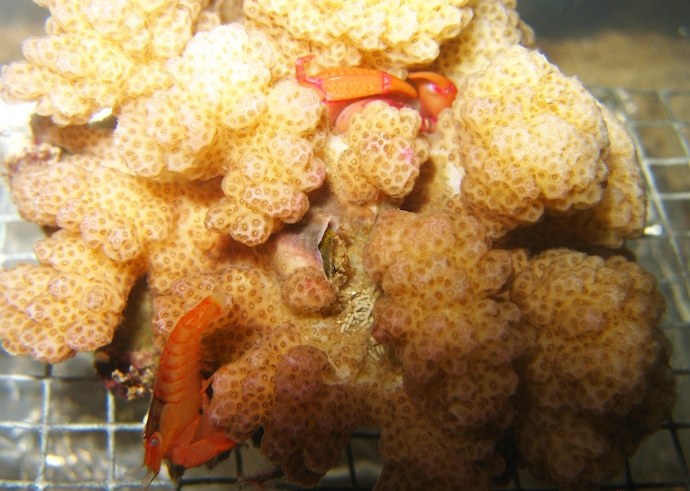 A close up of a coral with both Trapezia serenei (top) and Alpheus lottini (bottom). Photo


We’ve seen how Fungiid corals can inflate and deflate themselves in order to combat sedimentation. However, other corals aren’t as lucky as these Fungiids and they need help from outside sources.

In their paper “Housekeeping Mutualisms: Do More Symbionts Facilitate Host Performance?” researchers Adrian Stier, Michael Gil, C. Seabird McKeon investigated this question using the coral Pocillopora cf. verrucosa and the commensal organisms normally found on them: the crab Trapezia serenei and the snapping shrimp Alpheus lottini. These two symbionts were chosen as they are highly associated with Pocillopora spp. corals and are known to aid in the health and survival of this particular coral.

Stier, Gil, and McKeon performed their study on the island Moorea in French Polynesia on its western shore. There they removed heads of similarly sized Pocillopora sp. coral from the reef and transferred it to their testing facility nearby. Prior to testing, all of the commensal shrimps, crabs, and fish were removed from the corals and saved for later sediment removal potential.

This may be the focus of future work to better understand how the sediment was being removed.

That being said, they positively correlated increased sediment removal with total number of symbionts within the coral. As the coral continues to grow, it should continue to support more and more crab and shrimp symbionts in order to help with sediment removal.

Incidentally I also covered how these same shrimps and crabs fend off attacks by seastars so they are performing double-duty for the corals as well.