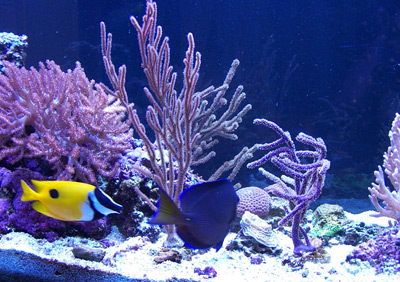 One-spot foxface, the coral munching culprit, and the new fish in town, the Atlantic blue tang

Caribbean Chris, who is currently in the process of moving his family down to Florida (apparently Ohio in mid-winter isn’t sufficiently tropical for his taste!), recently tore down his 127-gallon Caribbean reef biotope aquarium and bequeathed to me a variety of invertebrates, including several species of gorgonian, rock flower anemones, Ricordea, lettuce corals, and others, along with a lovely Atlantic blue tang.

Fortunately, there was plenty of room in my 125-gallon tank to accommodate all these specimens, as it held only five fish and a few soft corals at the time. As someone who generally makes stocking decisions at the approximate pace of molasses in January (thus the low stocking rate in my tank), I, of course, had some concerns about how this influx of livestock would affect my system and whether all of CC’s valued specimens would survive the transition and thrive under my care. Fortunately, the whole process went off as smoothly as could be hoped. Well, almost as smoothly. There have been a few minor issues, truth be told. The first occurred a day or two after the livestock was introduced, when my one-spot foxface decided to feast on a fluorescent-green lettuce coral, denuding about two-thirds of its skeleton. It didn’t bother any of the other newcomers and still hasn’t several weeks on. Apparently there was just something about that one coral that proved irresistible MORE