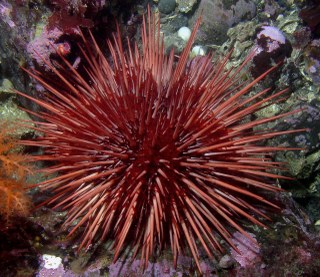 Is aging inevitable? Not necessarily for sea urchins

Study Shows That Sea Urchins Defy Aging, Regardless of Lifespan

Sea urchins are remarkable organisms. They can quickly regrow damaged spines and feet. Some species also live to extraordinary old ages and — even more remarkably — do so with no signs of poor health, such as a decline in regenerative capacity or an increase in age-related mortality. These ocean Methuselahs even reproduce as if they were still youngsters.

MDI Biological Laboratory Associate Professor James A. Coffman, Ph.D., is studying the regenerative capacity of sea urchins in hopes that a deeper understanding of the process of regeneration, which governs the regeneration of aging tissues as well as lost or damaged body parts, will lead to a deeper understanding of the aging process in humans, with whom sea urchins share a close genetic relationship.

In a paper recently published in Aging Cell, a leading journal in the field of aging biology, with Andrea G. Bodnar, Ph.D., of the Bermuda Institute of Ocean Studies, the scientists shed new light on the aging process in sea urchins, raising the prospect that the physical decline that typically accompanies aging is not inevitable.

“We wanted to find out why the species with short and intermediate life expectancies aged and the long-lived species didn’t,” said Coffman. “But what we found is that aging is not inevitable: sea urchins don’t appear to age, even when they are short-lived. Because these findings were unexpected in light of the prevailing theories about the evolution of aging, we may have to rethink theories on why aging occurs.”

The MDI Biological Laboratory in Bar Harbor, Maine, is an independent, nonprofit biomedical research institution focused on increasing healthy lifespan and harnessing the natural ability to repair and regenerate tissues damaged by injury or disease. The institution develops solutions to complex human and environmental health problems through research, education and ventures that transform discoveries into cures.

Coffman and other scientists working in the institution’s Kathryn W. Davis Center for Regenerative Medicine study tissue repair, regeneration and aging in a diverse range of organisms that have robust mechanisms to repair and regenerate tissue.

But Bodnar and Coffman’s findings contradict that theory. They found that although the variegated sea urchin, L. variegatus, has a much lower life expectancy in the wild than the other two species they studied, it displayed no evidence of a decline in regenerative capacity with age, which suggests that senescence may not be tied to a short life expectancy in the wild.

The scientists are planning future studies to identify why short-lived sea urchins experience negligible senescence, and, in particular, the role of the immune system in maintaining youthful function into old age.