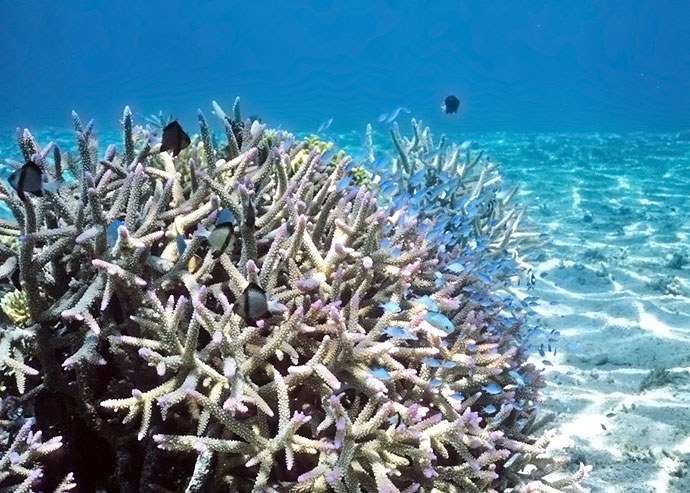 The “ecological disturbance theory” is validated by a recent study which shows fragmented reefs attract more fish than undisturbed reefs.  Scientists from the ARC Centre of Excellence for Coral Reef Studies and James Cook University built 30 identical small coral reefs in Papua New Guinea and transplanted Acropora sp. and 20 Yellowtail Damselfish (Chrysiptera parasema) onto each reef.  After allowing these reefs to settle in, they began their experiment:

Two Reefs Are Better Than One

Over four months, the scientists studied the impact of the habitat loss and fragmentation on both the survival of stock fish as well as the recruitment of new fish to these reefs.  They discovered that the first group of reefs (75% coral removal and no fragmentation) had the lowest population and diversity of fish.  In contrast, the second group (no corals removed but rearranged into smaller patch reefs) had the highest biodiversity and population, having recruited many new settlers.  The third group (75% removal and rearranged) fell in the middle of the other two groups.

Habitat loss (i.e. removal of corals) results in reef decline, but habitat disturbance (i.e the rearranging of rocks) actually promotes biodiversity and populations.  Aquarists know that rearranging rocks can help reduce fish’s territorial aggression.  But perhaps rearranging rocks on a regular basis can also help our tanks maintain higher diversity levels. We can also conclude multiple patchy reefs can attract more varieties of life than a single large reef of the same mass.  This is something to keep in mind when it comes time for your next reef aquascape.

The study is published in the peer-reviewed journal Ecology.