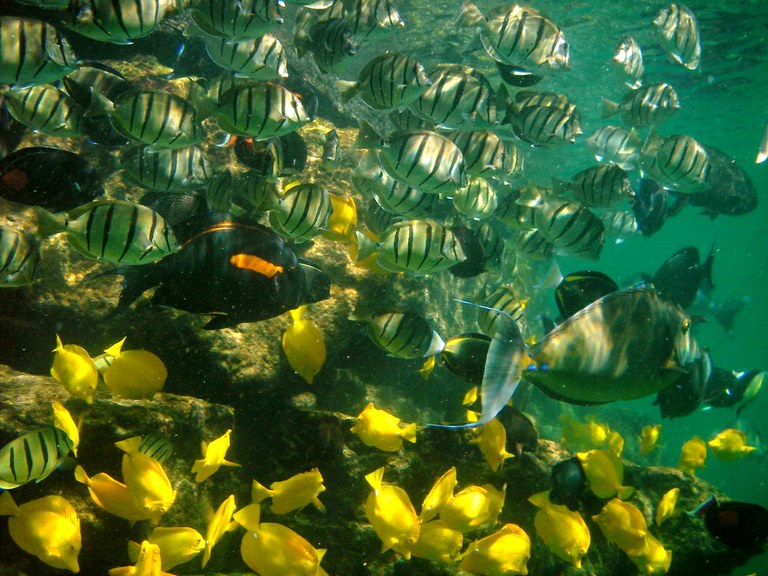 Convict Surgeonfish on top, Yellow Tang on bottom, and an Bluespine Unicornfish marching off to the right. Photo by Steve Jurvetson / Flickr.


Published recently in PLoS ONE, researchers Thomas Adam, Russel Schmitt, and others found an interesting case when evaluating severely damaged coral reefs in the South Pacific in French Polynesia. The reefs fully recovered after being nearly destroyed by predators like the crown-of-thorns starfish or from cyclones. They wondered why this occurred as normally when a reef is decimated by similar forces (especially in the Caribbean), the affected reefs never really bounce back and remain heavily algal-covered.

What Adam and the other researchers found was that when these reefs in French Polynesia were destroyed, the herbivorous fish population exploded shortly thereafter. When surveying the surrounding fringing reefs, they found their answer.

The fringing reefs were the nursery grounds for many of local populations of fish, most notably surgeonfishes and parrotfishes which are herbivores. The heavy herbivore population helped keep the algal cover to a minimum which in turn helped the remaining coral recover.

“We discovered that these fringing reefs act as a nursery ground for baby fishes, most notably herbivorous fishes,” said Andrew Brooks, co-author of the paper. “With more food available in the form of algae, the survivorship of these baby parrotfishes and surgeonfishes increased, providing more individuals to help control the algae on the fore reef. In effect, the large numbers of parrotfishes and surgeonfishes are acting like thousands of fishy lawnmowers, keeping the algae cropped down to levels low enough that there is still space for new baby corals to settle onto the reef and begin to grow.”

This stands in stark contrast to the Caribbean where over-fishing has heavily impacted the herbivorous fish population. With low numbers of adult herbivores, Caribbean reefs struggle to recover.

This research should also be highly interesting to managers of Marine Protected Areas as well.  Their findings indicate that not only is it important to protect the reefs in general but also the fringing reefs that act as nurseries for the local fish population.

“Our new and very novel results suggest that it also is vital to protect the fringing reefs that serve as nursery grounds. Without these nursery grounds, populations of parrotfishes and surgeonfishes can’t respond to increasing amounts of algae on the reefs by outputting more baby herbivores.”

(via Science Daily, PLoS ONE)