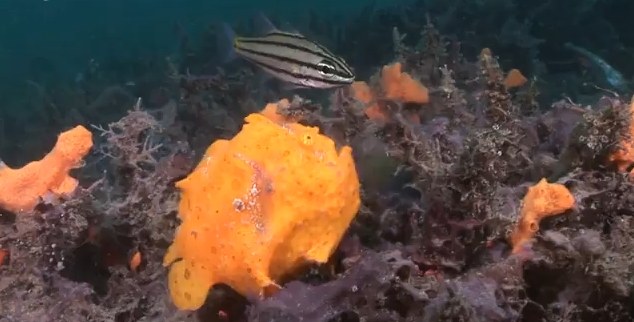 Frogfish and cardinalfish in the Lembeh Strait.


Frogfish (family Antennariidae) have always intrigued me.  Maybe it’s the way they sometimes use their pelvic and pectoral fins to walk along the ocean floor.  Maybe it’s how well camouflaged they are in their surroundings.  Maybe it’s how their eyes can sometimes be bigger than their stomachs when it comes to their next meal.  Yep, that’s it.

Frogfishes diet consists of fish, crustaceans, and even each other and they can eat a meal that’s up to two times their body size. When they first spot their intended victim, they will initially follow it with their eyes and then begin to slowly stalk it.  Once they get within a certain distance (roughly seven body-lengths), they begin to move their front dorsal fin (called the illicium) in such a way as to mimic their prey to draw them in closer.  As the target moves closer, they will slowly adjust their position to better strike.  When the time is right, a frogfish will suddenly open its mouth and it’s mouth cavity will expand up to twelve times it’s normal volume. This volume increase sucks in large amounts of water along with its intended prey and this striking can happen in as short as 6 milliseconds.  That’s fast.  Fast enough that it has scientists wondering how it does it as this time is shorter than the time it takes for a muscle to contract.

Take a look at the below videos and watch as frogfish target their prey.  In the first video, a cardinalfish nearly the size of the frogfish is devoured.  In the second video, a lionfish is the victim.  These are amazing creatures.