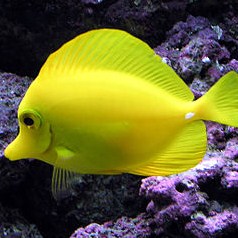 Many aquarists and hobbyists alike look forward to the day when aquaculture farms are teeming with millions of colourful fish to help stock public aquariums rather than wild caught individuals fitting the bill.  The reason it’s not happening now with all the species, according to some who have tried rearing the elusive Yellow Tang, is that resources are limited and getting the juveniles past the 90 day mark is quite a feat.

“Getting good survival of the larvae is the main problem, especially that first week,” said Syd Kraul, owner of Pacific Planktonics.  Kraul is currently raising flame angelfish, multicolor angelfish and yellow tang at the Natural Energy Laboratory of Hawaii Authority.   He reckons that the tang, in particular, is in high demand and very difficult to raise.  “Out of 10,000 eggs, you might get 200 to 300 larvae that survive the first week,” he said. “That’s not enough. By 90 days you won’t have any left.”  The 90-day point is when the fish change from clear to yellow and take up shelter in the rocks.

Kraul has been raising aquarium fish since 2006 and now he thinks he finally has it figured out and hopes to offer yellow tang on a commercial basis within a year.

“It’s no secret. It’s just about getting the right balance of food in the water,” he said. “Put in too much food and the fish are going to die. They need the food but they need clear water. That’s the challenge.”

Oceanic Institute and Pacific Aquaculture and Coastal Resource Center are two other facilities trying their hand at culturing aquarium fish so who knows, perhaps there’ll be a race to get the first fully captive-bred Yellow Tangs to market.  Keep your eyes peeled!

For more information, go to: http://westhawaiitoday.com/