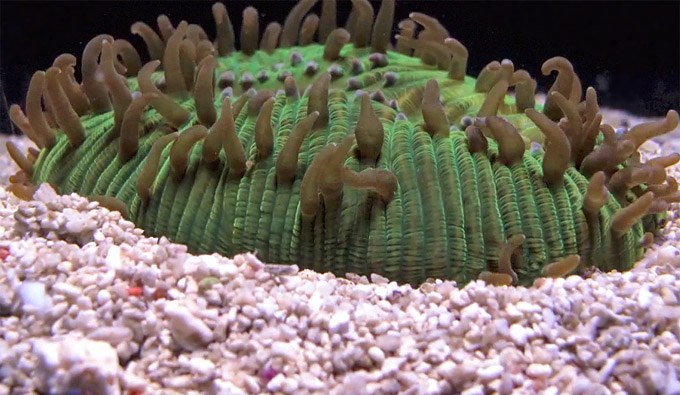 A Herpolitha limax (Plate Coral) raises itself out of sand through pulsed inflation.

Sedimentation is a real threat for coral reefs.  Nearly all corals are immobile and unable to free themselves when buried under sand, detritus, or whatever else may settle on coral colonies.

A select few corals, however, have developed mechanisms to save themselves from being buried alive.  Fungiid corals (Fungia sp., Cycloseris sp., Herpolitha sp., Lobactis sp., et al.) Walking Corals (Heteropsammia cochlea), and even some Open Brain Corals (Trachyphyllia sp. et al.) possess limited locomotion.  Many reefkeepers have witnessed movement of these corals in their aquariums, but it isn’t until recently that science has documented this phenomenon in detail.

The complex method of “escape” temployed by Fungiid corals is truly fascinating.  It’s much more than just inflating its tissue like a balloon to rise out of the sand with buoyancy.  These corals actively shed the sediment with a very controlled series of movements.

Researchers from the University of Queensland and Netherlands Centre of Biodiversity Naturalis document specimens of Lobactis scutaria and Herpolitha limax “Plate Corals” freeing themselves from being completely buried.  The corals accomplish this feat through a series of rhythmic inflation and deflation (“pulsed inflation”) in addition to mucus entanglement, ciliary action and peristaltic waves.  Through these complex actions, Fungiid corals are able to excavate themselves within hours.

Watch the time-lasped video of a buried Fungiid coral in action below.

The study is published in Springlink/Coral Reefs.

Advanced Aquarist thanks Tim Wijgerde of CoralScience.org for the referral.