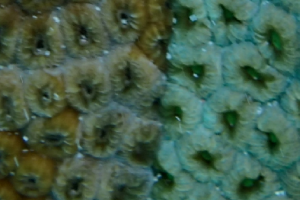 Close up of shared polyp between two colonies.

I was recently going through pictures from my exploratory trip to Belize earlier this year. I was especially interested in coral that were growing in close contact with one another, and I took many pictures and videos of coral interactions.

A relationship that struck me as particularly interesting was one between two colonies of Montastrea growing side by side. There was a streak of color in one colony leading from one coral to the other across the area where the two colonies met. I zoomed up with my camera and discovered that one of the polyps was shared by both colonies.

I have seen this happen with many of my Acanthastrea echinata grafts (another coral species with high Thrausto counts), where only one area or polyp will fuse while the rest of the graft remains separated. I speculate that there is a regulation between the two corals’ immune systems, only at that location, aided by the presence of similar populations of Thraustochytridsymbionts. The white paper “Identification of a protist-coral association and its possible ecological role” by a team of scientists in Israel, (http://www.int-res.com/articles/meps2006/317/m317p067.pdf ) expounds on this idea. The article has several pictures that show the colored striations of Thrausto populations in several coral species.

Enjoy this video of photos I took in Belize of the coral, starting close and zooming out from the shared polyp between the two colonies: