Gearing Up Was No Minor Challenge for our Marine Aquarium Forebears 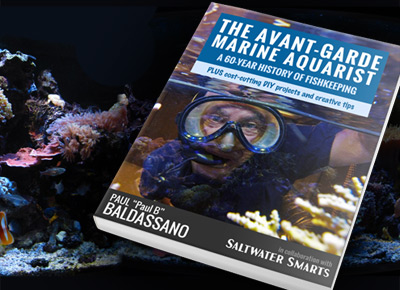 The Avant-Garde Marine Aquarist – now available in print and eBook formatsThink you’ve got equipment woes? Imagine what it would have been like trying to equip a marine system back at the dawn of marine fishkeeping! Well, hobby pioneer Paul “Paul B” Baldassano doesn’t have to imagine that because he was there to witness it. (Actually, he may have been there when our first human ancestor slithered out of the primordial ooze—we’re looking into it.) To get a sense of the equipment challenges early hobbyists faced, check out this excerpt from the first chapter of Paul’s new book, The Avant-Garde Marine Aquarist: A 60-Year History of Fishkeeping, now available in both electronic and print formats:Equipment limitations Early tanks had other concerns besides parasites, and the majority of those concerns were due to the aquarium hardware at the time. As I said, tanks had metal corners up until the early 60s, which was when all-glass tanks were sold. That led the way for larger tanks to be manufactured. My first all-glass tank was a 40-gallon, which was considered large then MORE