Gems of the Caribbean : The French Angelfish 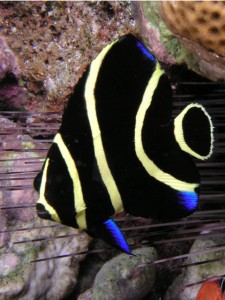 The fish species of the Caribbean Sea are often overlooked by marine aquarists. I’ve spent ample time beneath the waters of the Caribbean, and the reefs have a unique feeling and flair, un-matched by any other tropical sea. Since they don’t contain the sheer number of species as the South Pacific or other oceanic ecosystems, we often miss-out on some real jewels when deciding on a new tenant for a reef or fish only tank. Some aquarists are keeping a Caribbean species right now, and don’t even know it. Reef purists and those creating biotope tanks don’t like to mix Caribbean species with any fish they wouldn’t encounter in nature. Personally, I’ve kept both biotope aquariums and mixed reefs, and never had any problems introducing a few Caribbean species into a tank with fish from all over the world. When you consider the sheer number of oceans worldwide, it’s difficult to ensure that fish within your aquarium have encountered the exact species that you keep, unless you spend your entire focus making detailed stocking decisions.

That said, let’s take a look at the beautiful French angelfish, Pomacanthus paru. The French angelfish inhabits waters off of New York, ranging down into the Bahamas, Brazil and throughout the Caribbean Sea. I’ve seen them in mass numbers off the island of Roaton, Honduras, and throughout the dive sites off of Nassau Island, Bahamas. They exist at depths of 10 feet, down to about 600 feet, and school in large numbers around shallow reef crests or artificial reefs, such as sunken ships. They are especially common on rich moderate depth reefs, where they cruise in between gorgonians, and pair near sea fans. 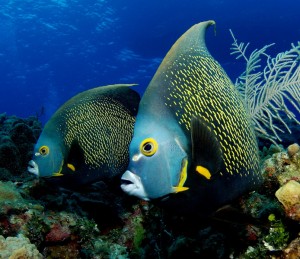 Many people don’t realize that both the French angelfish and the queen angelfish are cleaners, offering this service to a variety of species, including surgeonfish, wrasses, moray eels, grunts and jacks. My queen angelfish is an avid and effective cleaner, displaying the behavior so often, that smaller species become annoyed and steer clear of the queen.

On wild reefs, French angelfish feed on sponge, algae, gorgonians, zoanthids and tunicates. They are a guaranteed coral picker, and any polyp or LPS coral is most likely to perish beneath the lips of a French angelfish. In my experience, they are avid SPS nippers as well, totally destroying colonies in a matter of days. I couldn’t in good conscience recommend a French angelfish for anything other than a fish only display, and that same can be said about the queen angelfish.

French angelfish are often purchased as colorful juveniles. Their black body, highlighted with bright yellow lines may be an adaptation, giving the angelfish the appearance of a toxic nudibranch thus discouraging predation. This species is fast growing, and gets immense, topping off at 16 inches in the aquarium. They are a densely bodied fish, requiring as large an aquarium as possible, but nothing under 200 gallons.

A reef that recreates the shallow habitat of the Caribbean works well for French angelfish, minus the coral. I’ve seen tanks use artificial coral as décor, and occasionally an aquarist is able to get a specimen to co-exist with gorgonians, which creates a fabulous display. 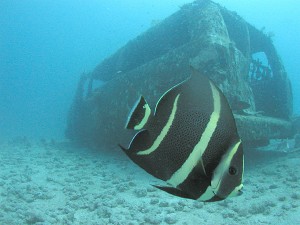 If you want to try something different, re-creating a ship wreck can offer the feel of a deep water artificial reef, and is the wild home to many French angelfish. Deep Blue Professional offers an

affordable line of realistic plane, ship and submarine wrecks. I personally use Deep Blue’s submerged Japanese fighter plane, ship and mangrove roots in my fish only displays, and have been pleased at how real they look, as they become encrusted with sea life over time. 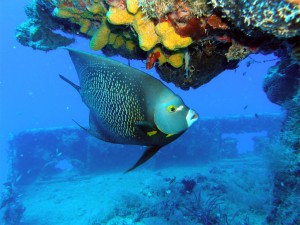 French angelfish are omnivorous, much like many other angelfish species. There are a variety of diets available tailored to angelfish, but I’ve found that P. paru does well feeding off a frozen herbivore mix, and I personally feed LRS’s herbivore frenzy. Any angelfish diet should be supplement with a frozen food containing sponge, at least once weekly, along with daily feedings of freeze dried sea weed. Soaking angelfish food in Selcon is advisable, as head and lateral line erosion has been recorded in this species.

While the cleaning behavior of the French angelfish is interesting to observe, the fish’s size can make it problematic. They can offer such a powerful bite, that it strips the flesh from smaller species. Yes, any dead skin or parasite is gone, although an open wound is left in its place. For this reason it’s best to keep P. paru with large fish, and P. paru does well with boistorous species, but not well with other angelfish. Surgeonfish and angelfish often butt-heads, as both feed on algae and recognize each other as feeding competitors.

Some aquarists assume if they add a Caribbean species, aggression will be mitigated as they don’t naturally occur with other animals within the tank. This is an incorrect assumption, and as soon as a new fish enters the territory of an established specimen and begins feeding, problems are likely to arise. Creating a separate algae feeding station within the tank, (by using a rubber band to affix algae to the rock) can solve this problem. I use a combination of rubber bands and algae clips to create multiple, small algae feeding areas throughout the tank, which helps recreate the environment on wild reefs.

The color change from juvenile to adult is dramatic, and very interesting to observe. French angelfish transform from a vivid black and yellow, into a dark grey adult, with yellow lined scales.