Get to know Reef-A-Palooza, Orlando 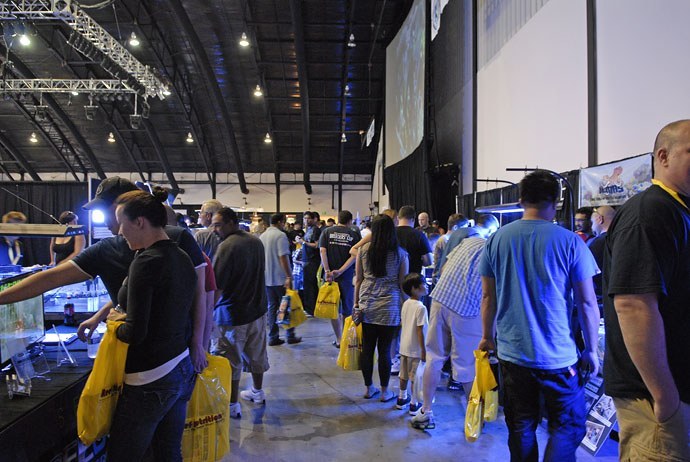 AA: We’ve attended several Reef-A-Paloozas (RAP) on the West Coast, so we were happy to see the successful reefkeeping event head out East.  Can you describe the history of RAP for those who have never attended?

RAP: Reef-A-Palooza (RAP) is an annual event every October and is promoted by the Southern California Marine Aquarium Society (SCMAS). Now in its tenth year, the show originally started in the founder’s back yard as a club frag swap. From its humble beginnings to what it has become …

RAP can be best described as an indoor marketplace where sellers, exhibitors, and hobbyists of all types can buy, sell, trade, and showcase their products to the marine hobbyist community.  Reef A Palooza Orlando is being run with the same standards that we are accustom to from the original event run by SCMAS.  However, they are not directly running the RAP Orlando event.

RAP: Victor first dropped the seed in Greg & Marc’s (SCMAS) ear way back in 2008.  Since MACNA was in Orlando in 2010, Florida’s entire reefkeeping community has grown rapidly. Plus with the demand by others on the East Coast who wanted a Reef-A-Palooza-type show, the time was right and so was the plan to make it happen. Now we have RAP for the first time ever outside of Southern California.

AA: What can attendees expect at RAP Orlando?

RAP: New gadgets and products will be released along with some of the best of the best that the hobby has to offer in live corals & livestock. Reef-A-Palooza mainly caters to the exhibitor and hobbyist rather than as an educational conference.  Most attendees come specifically for the purpose of viewing and seeing all the different exhibitor’s booths (corals…corals…corals) and displays.

With the addition of educational speakers and a great raffle, attendees will want to stick around for most of the day. The promotional and marketing efforts that have been put forth are nearly guaranteed to attract high participation and attendance.  Expect heavy foot-traffic throughout the building.

RAP: Yes; that is what we are striving for!

AA: Open mic time!  Is there anything else you’d like to tell our readers?

RAP: Make sure you make plans to take tours of all the fish stores in and around the Orlando area. Each one has plenty to offer and most are ready to cater to customers who are in from out of town in need of shipping home live stock.

Last but not least …

Please bring the whole family and make it a family vacation. The theme parks, Walt Disney World, Universal Studios Florida (directly across the street), SeaWorld Orlando, and many others are in close proximity to the event. There’s beautiful beaches either direction of Orlando.  We are also surrounded by shopping opportunities for every budget, all-season golf courses, and some of the most enticing dining opportunities on the planet. Less known but equally inviting are the downtown sections of Orlando itself and many nearby towns in Central Florida – places that celebrate public art and take pride in offering a myriad of cultural opportunities. Come to Orlando, and bring the family.  There’s plenty to do for all!

Reef-A-Palooza (RAP) is an annual event in Southern California now in its tenth year. For the first time ever RAP is coming to Orlando, FL! RAP can best be described as an indoor marketplace where sellers, exhibitors, and hobbyists of all types can buy, sell, trade, showcase their products to the marine hobbyist community. The main purpose of Reef-A-Palooza is to provide an enjoyable, positive atmosphere that is conducive to education and trade of both product and knowledge. As such, participating exhibitors range from large manufacturers, to retailers, to small livestock sellers, and participating hobbyists range from the beginner to the elite, rare-species coral farmer. It is the perfect venue to showcase new products in the marine aquarium industry. We strive to rally a diverse range of participants into the two-day event so as to present the best value and interest to everyone involved.