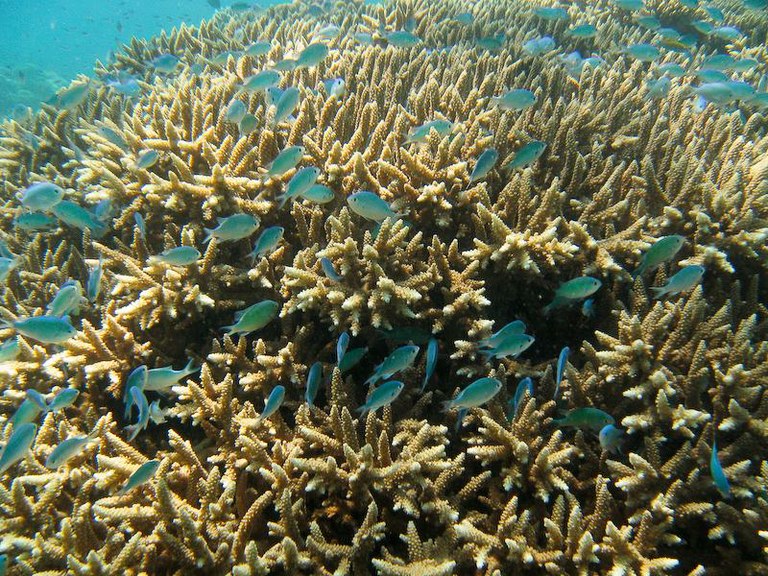 Chromis behaving naturally in the wild. Photo by Jeremiah Blatz


The aquarium’s solution was to introduce 15 Pacific bluefin tuna to the huge 5 meters (16ft.) tall by 14 meters (46ft.) wide tank.  Without predators, the sardines simply got too comfortable with their habitat and became lax with their schooling defenses.  Aquarium officials hope the additional predators will scare the sardines back into formation.  If not, officials may consider adding sailfish to the exhibit as well.

If you’ve wondered why your anthias aren’t schooling or why your chromis aren’t huddled in the branches of Acropora, it’s likely because they’ve grown too safe with their environment.  While predators obviously stress prey, the lack of threat for these dither fish causes them not only to drop their defensive mechanisms but may also encourage them to misbehave (e.g. become aggressive) against their own kind.  And studies have shown that fish kept in un-stimulating aquariums grow increasingly more stupid.

Clearly, no fishkeeper is going to introduce predators into their aquariums to threaten … and eat their expensive fish (It’s like shooting fish in a barrel for the predators).  But maybe a little artificial threat might not be bad  for aquariums with small social fish – especially if they are “misbehaving.”  Aquarists may want to try showing images or videos of predators in front of their aquariums to visually scare (for lack of better word) their fish.  Fish are also very responsive to smells (Read about the Olfaction in Aquarium Fishes).  Perhaps the scent of predators such as groupers housed in attached refugiums can induce small fish to exhibit their natural defensive behaviors.  If a manufacturer can bottle the scent of “fear,” I’m sure there is a good market for this type of additive.

FYI: When sardines do their thing, this is what the pilchard tornado should look like.

[Via Rocketnews24 via The Asahi Shimubun Digital (Japanese)]