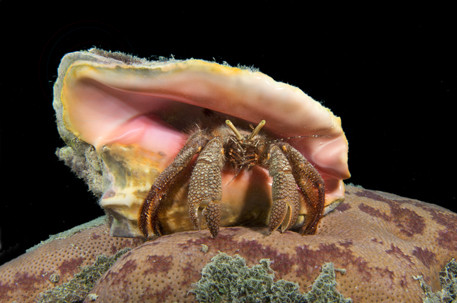 Good morning all, last week I found and photographed this giant hermit crab, but he was in an old beat-up shell that barely fit him. So after getting out of the water I ran into my office and grabbed some other empty shells for him and tossed them in the water next to him but they also turned out to be either to small or the same size as the one he already was in. I did jump in again and I watched as he measured one of the shells out for size but after checking it out decided it was the same as the one he had and left it.

So I again got out of the water and ran over to the sea-lion area where I knew they had a collection of old Queen conch shells sitting on top of a wall and asked if I could take one for my crab, they said no problem. I then ran back to where he was and without getting in the water tossed the giant shell in and it landed about three feet away from him, I knew he would find it. MORE