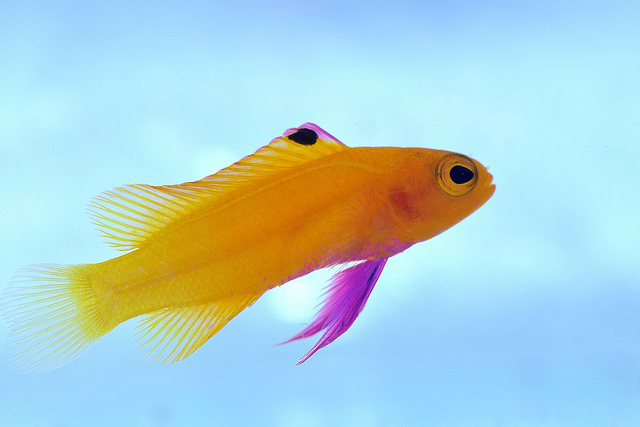 The family serranidae is quite possibly one of the most charismatic and familiar of all the reef fishes offered to the amateur or professional hobbyist. This might not come across as immediately apparent, but taking into account that all beguiling anthiines  (Pseudanthias included) come from this family, serranidae truly holds a rather prominent spot in the public eye. More commonly known as basslets (or some corruption of the term, i.e, fairy basslets, bass, etc.), serranids span a gamut of sizes, ranging from small, colourful reef associated species, to those of larger, duller and more predatory nature.

Of the large and diverse mix of genera, one stands out as a perennial favourite amongst fish enthusiasts. The eponymous “fairy basslets” of the genus Gramma, with its five species, are undoubtedly one of the most celebrated serranids. Known for their diminutive stature, exuberant color and charming personalities, these little fish make choice candidates for the home aquarium. Despite being a small genus, the species range from being either exceedingly common or fantastically rare. This is, of course, with regards to aquarium contexts, as they most certainly occur in relative abundance wherever they are found in the wild. The genus is strictly confined to the Western Atlantic. 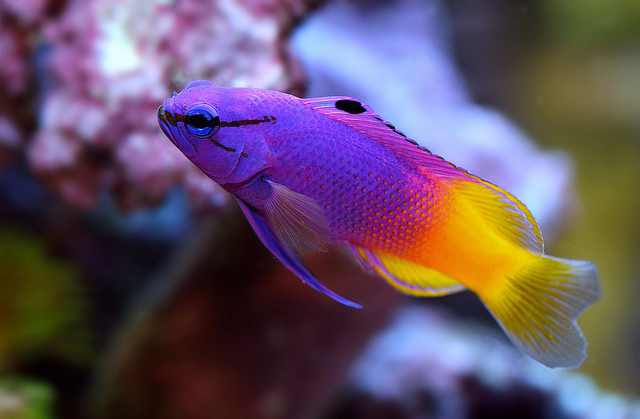 The Royal Gramma is the commonest of the five Gramma species, and is appropriately named for its beautiful and stark coloration. This species is distributed heavily along the Western Central Atlantic, from Florida to the Bahamas and over much of the Caribbean. It is one of first species an intrepid diver would encounter when diving along rocky slopes starting at 20m. Unsurprisingly, its large distribution is accompanied by certain phenotypic quirks, which may represent different species. Populations in the cayman islands, for example, have the anterior purple coloration reduced just shy of the pelvic fins.

The Royal Gramma is affordable and very hardy, making it one of the best fish for a budding aquarist. It is generally peaceful and self-minding, but will hold its ground against intruders in its territory by widening its mouth to appear intimidating. In large enough set ups, this species can be kept in loose groups. 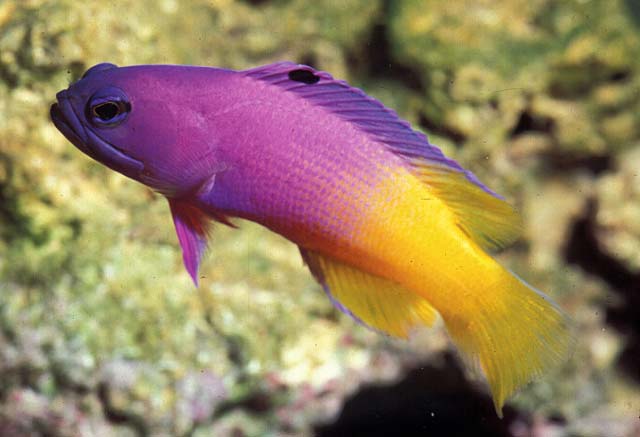 To the south in Brazil, G. loreto is replaced by a second, closely related ally. G. brasiliensis can be distinguished rather easily based on its more sombre coloration, as well as a heavily suffused purple and yellow interphase along the posterior half of its body. Unlike G. loreto, however, G. brasiliensis has a much more restricted territory, and is likewise less commonly encountered in the trade. It is interesting to note that while this species was, in the past, very common and easily obtained, G. brasiliensis is now no longer available as a wild import. 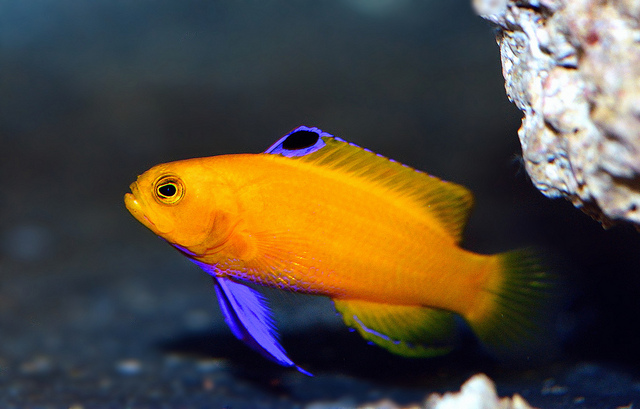 The most beautiful and coveted of the fairy basslets – Gramma dejongi. Photo credit: Lemon TYK.

Enter Gramma dejongi, the most illustrious and highly coveted of the members in this genus. Gramma dejongi is essentially identical to G. loreto and G. brasiliensis, except that the purple coloration is reduced to only the pelvic fins and the anteriormost portion of the dorsal fin. Some purple scaling is also present on the base of the pelvic fins. The rest of its body is covered in a luxurious goldenrod. G. dejongi was known from a few individuals, and is only recently described as a new species. It was named in honour of Arie De Jong, and is known only from Cuba. A single specimen was documented in the Cayman Islands, which might suggest a wider but undocumented distribution.

Because of the Cuban embargo, this species is unavailable in the United States. Outside of this territory, G. dejongi is available, but only as a great rarity. It is only in the recent years that this species became slightly more obtainable, but is still by no means anywhere near common. Needless to say, G. dejongi retails for exorbitant amounts of money. This species quite possibly hybridises with G. loreto wherever the two occur, as unknown and mysterious phenotypes exhibiting intermediate coloration have been regularly documented. 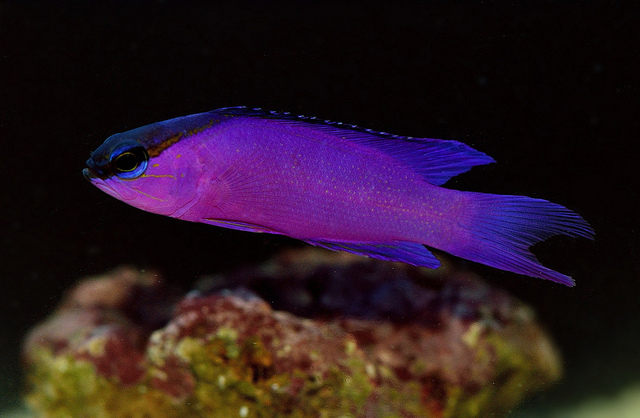 Another beautiful species, the black-capped basslet is predominantly found in deeper waters than its preceding counterparts. It occurs throughout much of the Caribbean and the Bahamas, reaching its limit in northern South America. G. melacara is quite uniformly violet. Its nape is adorned with a black “cap” which runs from the tip of its snout to the pre-dorsal region. Unlike the other species, G. melacara has a significantly deeper caudal fin fork, with a greater pronunciation in its upper and lower lobes. It’s captive care is equally easy and hassle free as the other species, but comes at a more expensive price than G. loreto. 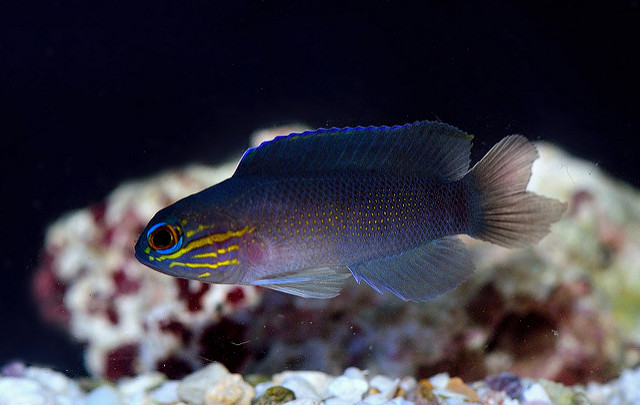 The fifth member of the genus Gramma is also the most poorly known and least often seen. It is completely forgivable should aquarists find themselves unfamiliar with this species. Indeed, Gramma linki is so seldom seen that most people have never even heard of its existence. Unlike the preceding species, G. linki is neither purple nor yellow. Instead, it is uniformly coloured in a rather curious gunmetal blue, with each scale on its body accentuated with a single yellow spot. The cheek is very ornately decorated in a series of warpaint like markings, adding some splash of color to this rather unassuming little fish.

Like most of the species, its distribution includes much of the Caribbean, south to the Central American and Northern American coasts. It is the deepest dwelling member of the genus, and can be found at depths of up to 200m. Needless to say, this species is rarely encountered in the aquarium trade. It’s expensive price tag and rather sombre coloration adds to its unpopularity, but personally, I find G. linki to be quite special and certainly not without its charm.

Regardless of your favourite, it is easy to see why the genus Gramma remains as one of the industry’s favourite genus. If you’re an aquarist, chances are, you will have kept at least one of these somewhere along your journey!