All glory to the Hypnoslug 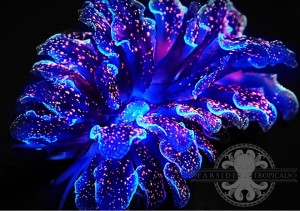 Just keep staring into the hypnotizing abyss. Not quite a buzzing cartoon toad from a distant future on Earth, this iridescently patterned nudibranch was collected for photography purposes in just 30 feet of water off the eastern coast of Florida by Farside Tropicals.

Almost all nudibranchs, also known as sea slugs, have evolved to feast on only one item in the ocean. Some feed on algae, others on coral, others still on flatworms. Though a small handful are quite useful for aquaria purposes and easily captive bred, most are best left to admire through photography. It is unfortunate that most species are harvested at all for the ornamental industry, as they are often very short lived and have much more value in being photographed and admired by scuba divers.

Even with such diverse resources as websites like Sea Slug Forum, a nudibranch version of FishBase, we have very little understanding of most species’ role on the reefs. Many species in the aquarium hobby are parasitic, coming in as hitchhikers on corals such as Montipora, Dendronepthya, Cladiella, and even Tubipora musica. It is not as simple as a picky fish adapting to eat something other than, say, its natural diet of coral polyps in the aquaria, though on several occasions I have witnessed “Monti Nudis” (Embletonia sp.) eating other smaller-polyped LPS corals such as Cyphastrea serailia and Pavona maldivensis. For the most part, these creatures should be left in the ocean.

The species pictured appears to belong to the genus Cyerce. Not much is known about the natural diet of these animals. As most species mimic what they eat, it wouldn’t be hard to imagine this little guy preferring some colorful tunicates or Ricordea florida. Many of the Cyerce species occur in the Indo-Pacific, and many do have the appearance of a soft coral colony, though not nearly as wildly colored as this specimen. Here is a photo of what appears to be the same species in the wild, sans LED lighting (6th photo down).