Normally, being placed in the ‘at risk’ category is not good news for a marine mammal, except, that is, when it was formerly in the ‘endangered’ one. 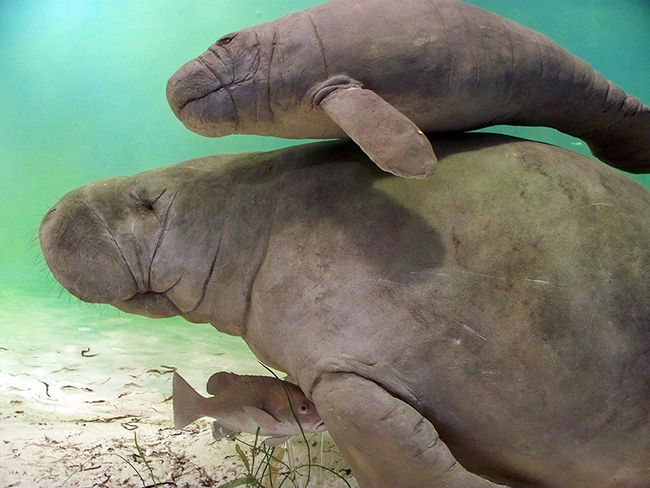 Moving from the ‘endangered’ to the ‘at risk’ column in the great spreadsheet of endangerment and the we-really-are-not-doing-very-well-as-a-species list is only a minor reason for celebration; there’s still a lot that can go wrong, but it is, for once, a step in the right direction for the Manatee.

Manatees, those wonderful, graceful, and peaceful marine herbivores have really taken a pounding from human activity in recent years.  Habitat loss, collision with boats, pollution, and the usual human-induced nastiness have pushed the animals to near extinction.

Surveys last year counted over 6,000 animals in Floridian waters, almost 1,000 more than the previous highest count, with a population increase of over 500% since counts began in 1991. Overall, the West Indian Manatee population is estimated at over 13,000 across its range.

Clearly this is good news, but it’s great news for the Manatee’s habitat and the other species that live within it.  It’s a long-held truism in conservation that if you put all the right measures in place to protect the most vulnerable species or those at the top of the food chain, then you assist all the others as well.  If you find the animals that are most sensitive to changes in their environment, the indicators of environmental change, and make sure they are protected then you may well be helping all the other less attractive species that are harder to get the public excited about.

“The Manatee is one of the most charismatic and instantly recognizable species,” said Michael Bean, principal deputy assistant secretary for Fish and Wildlife and Parks.

“It’s hard to imagine the waters of Florida without them, but that was the reality we were facing before manatees were listed under the endangered species act. While there is still more work to be done to fully recover manatee populations, their numbers are climbing and the threats to the species’ survival are being reduced.”