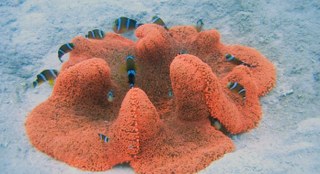 
For those of you that have been following Kenneth Wingerter’s excellent Clownfish series or simply love the symbiotic relationship between clowns and anemones, the video will interest you.

The video was captured July 2011 by Will Webster while diving off of Emon Beach at Kwajalein Atoll, Marshall Islands. Kwajalein Atoll is located in the west central Pacific Ocean, about 2,100 miles southwest of Hawaii and 1,400 miles east of Guam and is host to some spectacular fish (and in the past, some of the best live rock) entering the aquarium trade.

This particular 1 minute 40 second video features a gorgeous bright red carpet anemone (Stichodactyla gigantea or S. haddoni) measuring roughly 1.5 feet in diameter hosting at least 14 different Tricintus clownfish. Stichodactyla anemones are typically solitary animals living in sandy / muddy substrate and can reach upwards of three feet in diameter when fully grown, so it’s no surprised to see this one out this far from the reef flat.  They’re also known fish-eaters and are difficult to keep in captivity but are some of the biggest and most colorful anemones in the world.