Razorfishes are a diverse and highly specialized group of tropical wrasses that aquarists seldom get to see in captivity. They occur almost exclusively in sandy habitat, often far-removed from coral reefs, which naturally makes them quite challenging  to collect. And compounding this difficulty is the group’s remarkable adaptation for surviving in such an open ecosystem— these fishes have the ability to disappear in an instant beneath the sand, and, even while buried, they can continue to swim away

In the grand picture of labrid evolution, the fishes in this group can be lumped into a single lineage, the tribe Novaculini, whose members share a few notable features: an interrupted lateral line, a smooth preopercle, a single pair of large canines on the tip of the upper and lower jaws, and a notably flattened body. This last trait is relevant to their sand-diving behavior, and, in the most specialized members (e.g. Iniistius), the profile of the head is especially steep and nearly keeled, allowing the razorfish to slice into the substrate

Iniistius is the largest genus, with at least 22 valid species known (and potentially more awaiting recognition). They occur throughout the Indo-Pacific and can often be quite common in their preferred habitat. Similar to fairy wrasses, these are haremic, with dominant females eventually turning into the more colorful males, which must then defend their territories from competition. Females are naturally more numerous, and, depending on the species, these occur either singly or in small groups. 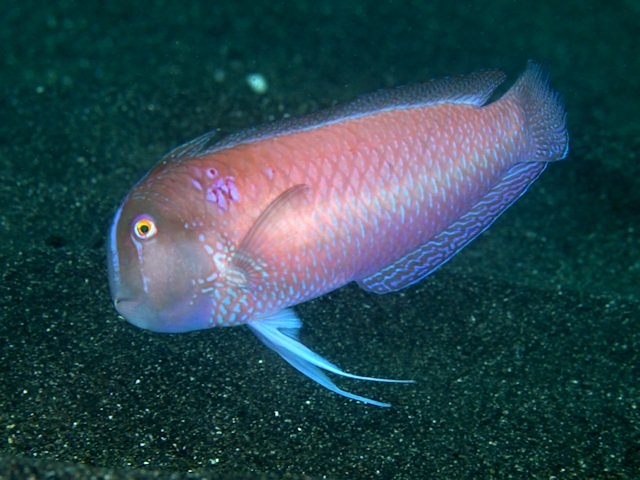 Males are a bit different in appearance, though this sexual dichromatism is not nearly as dramatic here as it is in some of the other novaculins. These males lose a bit of the blue on the operculum and gain a lavender spot above the pectoral fin which becomes accented in a deep red. Similar male markings can be found in many of its congeners, like the “fingerprints” seen in I. pentadactylus. To date, I. verrens is known only from Japan and Taiwan, though it might sneak into the northernmost portions of the Philippines, where it’s possible that aquarium specimens may one day appear from.