Got aggressive hermit crabs? Give them better homes 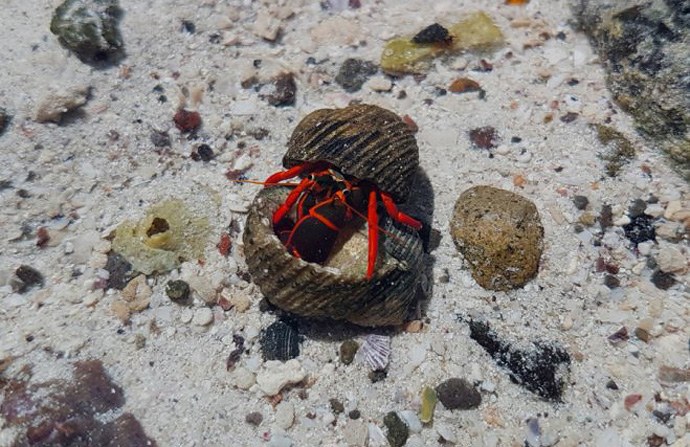 Sheer aggression rather than pure muscle strength often gives hermit crabs living in broken shells the edge during a fight. Broken shells constrain crabs’ activities because they are heavy and a large portion of them unusable. Crabs living in broken shells value an intact shell and will fight more aggressively to get a better one. This is according to research conducted by Guillermina Alcaraz of the Universidad Nacional Autónoma de México in Mexico and Gastón Ignacio Jofre of Texas A&M University in the US. Their findings are published in Springer’s journal Behavioral Ecology and Sociobiology.

The life of a hermit crab is mostly dictated by the search for a better fitting and more intact shell. When a hermit crab wants to take another crab’s shell, it attacks by tapping on the shell vigorously and with great energy. During such shell fighting, attackers will try to evict opponents in a manoeuvre that seems to require high muscle strength.

Previous research conducted by Alcaraz showed that crabs that occupy broken shells in the wild have reduced metabolism, low energy levels, and poor nutritional intake. Despite this, they still outperform ones that occupy intact shells during fights. “Broken shells have some of their surface absent, leaving a reduced internal volume that is useful for the crab’s protection; therefore, crabs use a relatively small part of the broken shell, but still have to carry the whole structure,” explains Alcaraz.

Alcaraz and Jofre therefore set out to explain this seemingly incongruent fighting dynamic by exploring aspects of muscle strength and aggression. The authors hypothesized that carrying a broken shell would be a type of ‘resistance training’ for the crabs and make them better fighters. They collected male hermit crabs off the coast of Mexico. Crabs in broken shells and in intact shells were then coerced into leaving their current shell homes to move into an empty one which was attached to a thread. The thread connected to a pulley and a dynamometer to help the researchers measure the muscle strength of each crab. In a further part of the experiment, fights between crab duos were orchestrated. Unexpectedly, crabs with broken shells were found to have weaker muscle strength than those with intact ones, even though they were habituated to carry around much more weight. These crabs were however much more aggressive and fought at a higher intensity, even against larger contestants. This behaviour increased their chances of winning the fight in conditions of an apparent disadvantage.

“Prolonged poor conditions following the use of a broken shell seem to increase aggressiveness by affecting the long-term subjective value of a resource, which increases the motivation to fight” concludes Alcaraz.

Jofre comments: “Our findings highlight the role of the recent past associated with the fighting performance.”