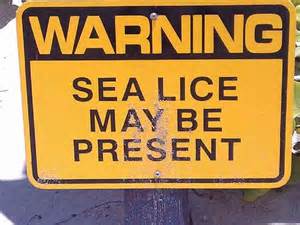 If you have ever had your day at the beach ruined by a mysterious and irritating itchiness, you may have blamed it on ‘sea lice’. Sea lice is well known to those in Florida and the Caribbean during the summer months. Warnings of sea lice are commonly posted on Florida beaches along with the tide conditions. However, sea lice is actually a misnomer. As small as a grain of salt, what is referred to as sea lice is in fact actually the larvae of jellyfish. According to studies, the most common outbreaks of ‘seabathers eruption’ seem to be linked to the larvae of thimble jellyfish. The worst part about this nasty little rash is that you wont know you have been affected until 24 hours or so later. The ‘sea lice’ are nearly impossible to see under the water and can become trapped in bathing suits or clothing. The unfortunate symptoms will appear the next day and can include raised bumps, redness, itchiness, and even fever, chills and nausea. Removing your swimsuit and showering right after swimming seems to be the best method to avoid the rash. So the next time you head to Fort Lauderdale, Key West, the Bahamas or Grand Cayman, and you emerge covered in a rash, you can thank the humble thimble jellyfish for your vacation souvenir.  MORE