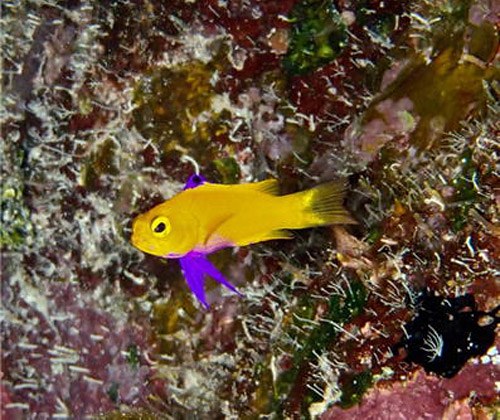 The solitary Gramma dejongi was spotted swimming amongst a group of Royal Grammas (G.loreto) in July 2013 at 18 meters deep on a spur-and-groove formation 1.5 km east of the Bloody Bay Marine Park and again in August at the same location, suggesting this species is site-attached.  G. dejongi appears to behave very similarly to G.loreto, often swimming upside down or vertically close to the substrate.  Hopefully this species is also as easy to breed as Royal Grammas.

Due to the United States trade embargo against Cuba, US aquarists are unable to legally obtain Gramma dejongi but perhaps not for much longer.  With the discovery of this basslet at Little Cayman, there is a possibility to collect and import this fish into the USA.  Granted, only one specimen was observed and it was only 220km (135 miles) outside of Cuba.  Still, the observation demonstrates the potential for enlarging G.dejongi’s natural distribution as scientists and divers further explore the Caribbean.

Here is a video posted by B-Box Aquarium in Japan in October 2011 of one of the first G.dejongi sold within the hobby.  Beautiful fish, is it not?  It was listed for the princely sum of $4,500 USD.