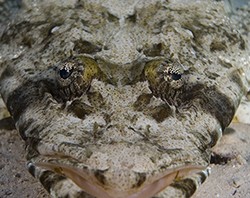 I’ve just written a new article for Reefs Magazine about deception and mimicry in fish.  As a trailer to that piece, I’d like to share a few of the pictures from it; they show some of the great fish disguises evolution has thrown up.
We all understand the concept of camouflage:  The better able you are to blend in with your surroundings, the more likely you are to avoid being picked off by a predator or keep hidden long enough to be able to grab something to eat.  Either way, the better your camouflage the more likely it is you’ll survive, raise offspring and pass on your genes.

Charles Darwin didn’t coin the phrase ‘survival of the fittest’, but camouflage is a perfect example of Darwin’s ideas.  A well-camouflaged fish fits its environment best.  You’ll note that I use ‘fits’ in its intended sense, it doesn’t exclusively mean physical prowess after all.

However, I digress.  Here are three great fish that have taken camouflage to the next level: 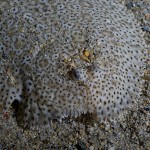 Firstly, the Moses Sole (Pardarchirus marmoratus).  This great little fish from the Eastern Pacific region can adapt its skin pigmentation to blend in with the substrate.  Only when it moves can you begin to see a fish-like shape.  It also partially buries itself with only its eyes protruding from the sand. 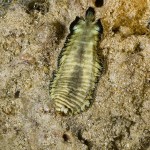 Another Sole is the Banded Sole (Soleichthys heterorhinos), this little beauty at around 15cm mimics a toxic flatworm.  Its blue fin margins coupled with the fish’s sinuous rippling motion complete the picture.  I’ve known many a diver fall for this fish’s mimicry. 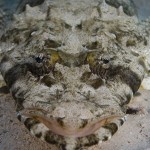 Last is one of my favorites, the Crocodile fish.  Papilloculiceps longiceps grows to a meter in length and is another laterally-compressed bottom dweller.  It has a capacious mouth and while it rarely moves far, it is a formidable ambush predator.  The feature atop each eyeball that further breaks up the fish’s outline is known as an ‘iris lappet’.