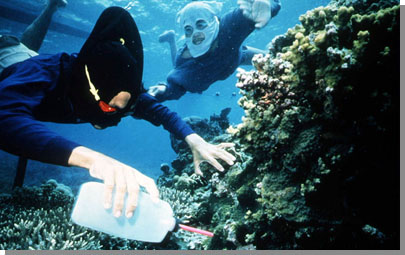 Though illegal, the use of cyanide to catch fish continues. A fisherman drops a small tablet of the poisonous chemical into a squirt bottle filled with water, dives down to the reef, and sprays the toxin liberally over the rockwork. The cyanide works immediately, stunning the fish for about 20 minutes, which is plenty of time for the fisherman to scoop up their prey or rip apart the rock and retrieve the paralyzed fish inside. The process is effective, but it comes at a huge price – many of the animals caught in this method die within 48 hours, and that’s out of the fish that survive the capture in the first place. Small fish and spawn, are often killed immediately upon exposure, while others suffer long-term effects from the toxin. In seawater, sodium cyanide breaks down into sodium and cyanide ions; the ions block the oxygen-transporting  hemoglobin in fish, essentially asphyxiating them, which, of course, leads to death.

Smithsonian.com has just reported that two scientists at Roger Williams University in Rhode Island are working on a (at least partial) solution. Right now, it is very difficult to tell if a fish has been caught with cyanide – they look exactly the same as non-cyanide caught specimens,  and the lab test takes about an hour and a half per sample, which means that the vast majority of fish are never tested. But biologist Andrew Rhyne and chemist Clifford Murphy have created a portable, hand-held device that uses modified electrodes to detect even extremely low levels of thiocyante, which is the compound that fish excrete after metabolizing and converting the ingested cyanide. Though still in the prototype stage, the sensor would revolutionize testing, and could be employed at every step of the trade, from the dockside fish markets to the customs counters, to the pet stores that sell the fish.

Rhyne and Murphy understand that the fishermen in the Philippines, where the majority of this practice is taking place, have no motivation to change their ways. More sustainable practices would take longer and incur more expense, and the fishermen would still receive the same amount of money for the fish they sell. The scientists propose a certification system, similar to the one established for organic foods, and guaranteed “cyanide-free fish” would sell at a higher price, securing the fishermen’s livelihood, while saving many, many lives.

The sensors still need to be perfected, and the scientists need funding to manufacture the device on a large scale. They estimate that it will be another one to two years before they will be able to introduce the device to the market, but their initial results are very, very promising.