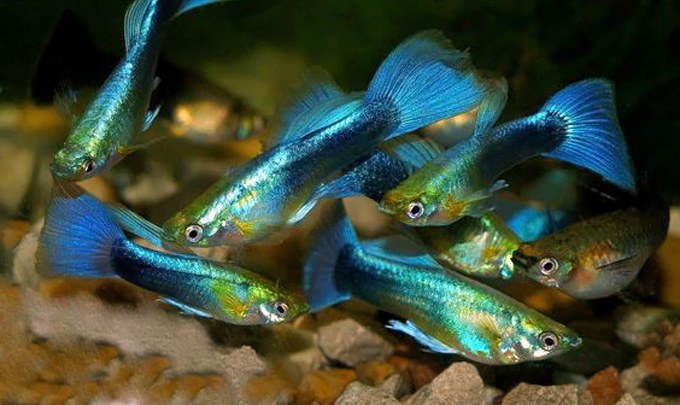 How many guppies do you count?


Guppies: study sorts the maths whizzes from the dunces

Some guppies have a better sense of maths than others. It allows some to find the biggest shoal possible in which to be protected against predators, while others are better at choosing fruitful foraging ground. This is according to research conducted by Tyrone Lucon-Xiccato and Marco Dadda of the University of Padova in Italy in Springer’s journal Behavioral Ecology and Sociobiology.

It is well known that some people and animals such as chimpanzees and African grey parrots are simply better at solving mathematical and numerical problems than others. It helps them compare and distinguish between quantities, and to make decisions accordingly to adapt to their surroundings. Because very little work has so far been done to establish whether individual animals belonging to different species also possess such enhanced mental abilities, Lucon-Xiccato and Dadda turned to guppies (Poecilia reticulata). Theirs is the first study of its kind on fish. Three quantity discrimination tests were set to 26 guppies kept under laboratory conditions.

For guppies, safety in numbers is important. Living together in shoals provides them with better protection against predators. To find out if these fish can distinguish between bigger and smaller shoals, individual guppies were introduced to a new tank that provided no cover or refuge, but in which shoals of either four or six others swam. Two foraging tasks were also set. In the one, the fish had to choose between four or six food items, and in the other between different-sized bites.

In the process, it was established that some guppies are better at discriminating between quantities than others. Individuals with such a superior ability performed better in various contexts. They, for instance, joined the bigger shoal, and picked out the larger pieces of food. It was found that their mathematical prowess, however, does not extend to exact numbers and counting, as they could not accurately tell different numbers of food items apart. The researchers believe that in their calculations, the fish take cumulative surface area of a shoal or food into account.

The researchers also found that some of the guppies fared better in the antipredator test, while others were more successful in the food experiments. The researchers believe that the possession of such enhanced, yet slightly differing, quantity discrimination abilities influences the decisions that individual guppies make when they forage, or try to stay out of harm’s way. In the process, it increases the chances of some guppies of surviving in the wild compared to those of others.

“This trade-off is likely to have a profound impact on the fitness of individuals, with some gaining advantage from their cognitive abilities that confer defence against predators, while for others it improves their foraging success,” says Tyrone Lucon-Xiccato.

“To date, the existence of similar trade-offs in cognitive performances has received very little attention in animals, even though these constraints might be more common than previously believed,” notes Marco Dadda.