Hagfish slimes shark and other fish with gill-choking mucus [video] 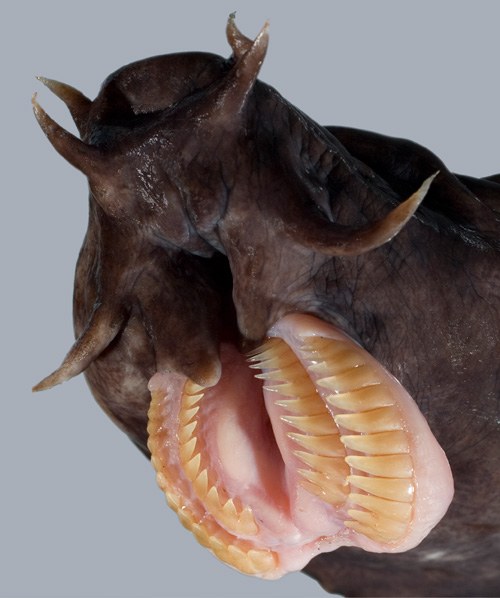 A close-up of the jaws of a hagfish.


There’s some debate in the scientific community whether hagfish are actually true fish as they have a skull but no vertebral column to speak of.  Some have called them “slime eels” due to the large volumes of slime they can produce but they are not eels either.

It’s been known for quite some time that hagfish will excrete large volumes of mucus from pores in its body when attacked and up until recently scientists have believed that hagfish are strictly ocean bottom scavengers.  New data suggests that not only are they scavengers but they are also active marine predators.

In addition to the predation behavior, they were also able to capture footage of various higher level predators attacking the hagfish and subsequently getting slimed. When slimed, the predator instantly released the hagfish and swam away with a mouth full of gill-choking mucus.

According to the paper:

Biters (sharks, conger eels) and suckers (wreckfishes, scorpionfishes) could not successfully acquire their potential hagfish prey. From our video observations, it seems obvious that the deterrent effect was due to a gill-clogging mechanism. …

The ultimate fate of these would-be predators was not observed. Hagfish slime covering the gills may lead to suffocation, or it may simply dissolve away, as hagfish slime is often considered to bind only loosely with water.