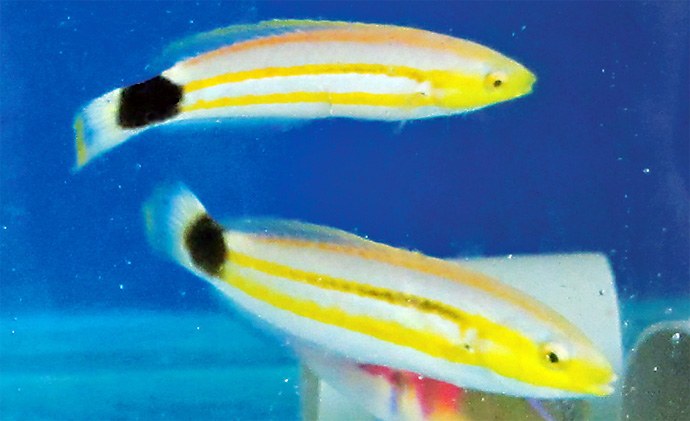 
Halichoeres gurrobyi is currently only known from Mauritius, the tiny island in the Indian Ocean off Madagascar. A lot of spectacular (and rather expensive) endemic fish are found here including the Cirrhilabrus sanguineus fairy wrasse and Macropharyngodon vivienae leopard wrasse (a fish I currently keep in my 176 gallon reef).

Even though now formally assayed and described, Halichoeres gurrobyi still has mysteries for us to unravel including its terminal phase (male) coloration.  Halicoeres wrasses are protogynous hermaphrodites (female to male), and as with many such wrasses, the terminal phase “super male” coloration is quite different than females and juveniles.  The largest documented H.gurrobyi is the 90mm (3.5 inch) specimen netted in the photograph below, so we still don’t know for sure what the terminal phase males look like.

The new wrasse is described in the Journal of the Ocean Science Foundation.