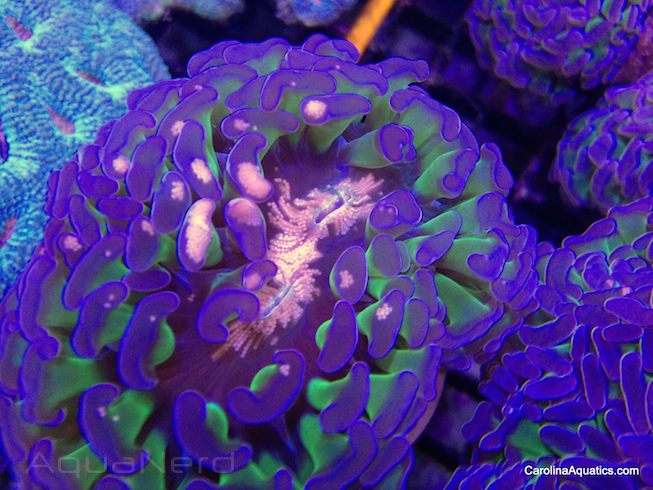 Although we’re pretty caught up in the Interzoo hype, we haven’t forgotten about all of the amazing corals that attract us to this hobby in the first place. To prove my point, we’ll now shift our focus to a really interesting find from our friends at , an East Coast marine aquarium livestock wholesaler based out of North Carolina. They recent received a batch of hammer corals from North Australia, and as you can clearly see in the images and video, they are full of what appears to be eggs. These eggs have accumulated in the tentacle tissues of the coral, with some of them forming large bundles and others freely floating within the tissue like ping pong balls trapped in an aquarium. We don’t see any of these eggs being released into the water, but clearly something out of the ordinary is going on here. Kris Cline, owner and Operations Manager at Carolina Aquatics, says that in his 18 years in the hobby and industry, he’s never seen anything like this. And to be honest, neither have we. I mean, we’ve seen corals spawning in aquariums before, but never have we see this sort of egg accumulation in the tissues and be this visible. Kris went on to explain that the exporter told them that the Euphyllids are spawning on the reefs right now, and did it around this time last year too MORE: Hammer Corals Caught Accumulating Eggs in Tentacles in Preparation of Spawning Event