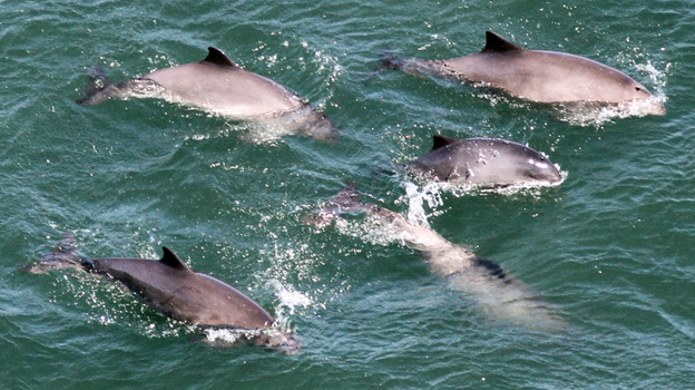 
The decline began back in the 1930’s around the World War II era. Around this time the Bay was turned into a huge wartime port and a major ship-building center with warships regularly using the waters. The Navy secured a net seven-miles long across the bay in addition to planting hundreds of mines in the waters to keep out enemy submarines.

Water quality could have also played a huge role in their disappearance. In the 1950’s and 1960’s it was common for raw sewage to flow into the bay.

“I remember coming across the Bay Bridge when I was very young, and it would just smell,” says William Keener of Golden Gate Cetacean Research. “It would stink.”

Passage of the 1972 Clean Water Act turned the water quality of the San Francisco Bay around but it took quite a bit of time for the food cycle to return to normal. It has also possibly taken the harbor porpoises quite a bit of time to rediscover the Bay.

“Over 60 years, we’re talking about a number of generations of porpoises,” Jonathan Stern, Ph.D. says. “So it’s quite likely that San Francisco Bay as a habitat was out of the institutional memory.”

Based on the group’s research, the harbor porpoise numbers are on the rise and they are keeping a detailed photographic record of each porpoise they see so they can identify them in future sightings.

“It’s one of those very few good-news environmental stories. And it’s in our backyard. It gives one hope,” Stern says.