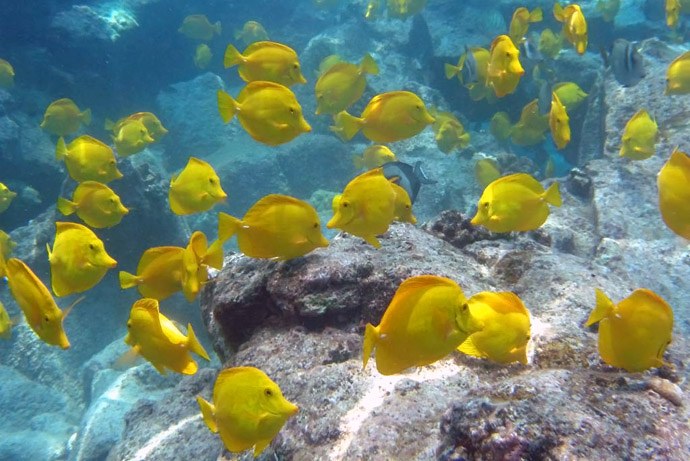 A school of yellow tang in Hawaii (photo by Bill Walsh)

Many coral reefs around the world are currently suffering mass bleachings due to warming global seawater temperatures and also in large part to 2015-2016 El Nino, which is predicted to be the strongest on record.  This year may result in the worst bleaching events documented in many parts of the world.

OEQC Director Jessica Wooley wrote to the Hawaii’s Department of Land and Natural Resources: “The science and data now also show significant negative effects from nearshore commercial aquarium fishing throughout much of the Hawaiian Islands and the importance of protecting areas, at least for a period of time, to allow fish populations to recover.”

“This is the new approach, with no data to back it up.” – Tina Owens, Lost Fish Coalition

Having paid particularly keen attention to research regarding coral conservation and particularly data pertaining to our hobby over the past decade, Advanced Aquarist is not aware of what science and data Wooley is referring to. The available data shows that Hawaii’s fisheries are some of the best managed in the world, and wild populations are rebounding.

On the other hand, we are aware of the mountain of data that shows tourism’s extremely harmful impact on coral reefs, including the recent study showing how toxic sunscreen tourists wear are to corals.  But for whatever reason, the tourism industry escapes blame.

Don’t get us wrong: we are in favor of anything that helps coral reefs so long as the data supports the action.  True; it has been shown that herbivores are vital to coral reef health.  However, to link aquarium collection with bleaching is highly suspect at best.  To us, this is another transparent attempt to find a reason – any reason –  to end aquarium fish collection based on dogma, not science.  To ignore the biggest proven offenders (e.g. tourism, coastal development, the most larger recreational fishing) reeks of gross intellectual dishonesty.

To end on a positive note, this excerpt from the Hearld Tribune gives us hope that there are still reasonable people helping to shape policy in Hawaii:

“Dart and Tina Owens, both members of the West Hawaii Fishery Council, say the push outlined in Wooley’s letter is just the latest effort by groups such as [Rene] Umberger’s that have been trying to orchestrate a ban for years.

Owens is director of the Lost Fish Coalition, which tried hard for a ban on aquarium fishing decades ago. Today, she no longer sees a need for a ban and instead supports management like the fish replenishment areas she helped foster.

“(Aquarium fish opponents) haven’t gotten traction with other efforts,” Owens said. “This is the new approach, with no data to back it up.””