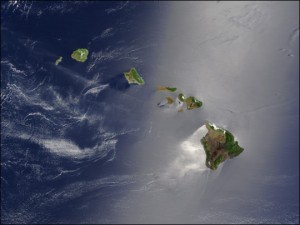 Imagine a wave, a giant wave, rushing inland toward you. Imagine it keeps coming, and coming without any end in sight. You’re thinking of a tsunami. Now imagine the wave is more than 1000 ft high (300 m), enough to engulf the bottom 2/3 of the Empire State Building. This is a megatsunami.

Speaking at the fall meeting of the American Geophysical Union, Dr. Gary McMurty (a professor of geology and geophysics at the University of Hawai’i at Mānoa, and co-instructor for a couple of geology courses I took as a grad student here UHM) reported his recent work showing that over the last 4 million years the Hawaiian Islands have experienced at least 15 megatsunamis. Unlike typical tsunamis, which are usually driven by earthquakes, Hawaiian megatsunamis are driven by catastrophic landslides as large sections of the volcanoes that build the islands cleave off and cavitate the ocean. Surprisingly, these landslides are linked to climate change. During the transition from an ice age to an interglacial period the planet experiences a major rise in sea level. For example, from the last glacial maximum to present day, global sea level rose almost 400 ft. (120 m). A large increase in sea level, possibly in combination with heavy rains, seems to destabalize the volcanic slopes, leading to a landslide.

Unlike more traditional tsunamis, these landslide-driven megatsunamis don’t travel very far across the ocean, but have a major impact at the local scale. Suffice to say a 1000 ft (300 m) wave coming ashore is going to mess up the local real estate. Just to give some idea of the scale of such a landslide, one that took place from the island of O’ahu removed a chunk of rock the size of Manhattan. I reiterate, a section of rock fell off of O’ahu that was the size of Manhattan. Incidentally, this landslide created a series of incredible, steep cliffs (called palis) and created a space where the town of Kāne‘ohe now resides, and where I live.

Thankfully, the last such event (a relatively small one) occurred 13,000 yrs ago, long before Polynesians had made it to Hawai’i, and it is unlikely that another event of this sort will occur any time soon.