The highly sought after Japanese Angelfish (“Centropyge” interrupta) is known primarily from the subtropical portions of mainland Japan and the nearby Ogasawara Islands, and, with specimens reaching upwards of 15cm, it certainly pushes the size limits for “dwarf” angelfishes. This is perhaps due in part to its notable preference for cooler waters, where many reef fishes tend to grow to larger sizes. C. interrupta is by no means a common find in Hawaii, with it only being documented from the northernmost extension of the archipelago (Midway Island, Kure Atoll). When taking into account the primarily Japanese distribution of this species, there is a fascinating biogeographic pattern to study here. Just how does a Japanese species create a population in the Hawaiian Archipelago?

The answer likely comes from a combination of the prevailing oceanic currents near Japan and the intervening terrain of the ocean floor. Much like the famous “gulf stream” in the Caribbean, the Kuroshio current brings warm tropical water up along the coastline of Japan, enabling its coral reef ecosystems to thrive in these northern latitudes. An extension of this current continues eastward, beyond the Mariana Arc and towards Hawaii. The vast majority of this region of the Pacific is devoid of surface landmasses (with Marcus and Wake Islands being the only minor exceptions), but hidden beneath the surface are a number of unexplored seamounts and guyots. Dispersal must happen when the Kuroshio current brings Japanese larvae into these scattered habitats and ultimately onward to Hawaii. One lingering question is why C. interrupta has failed to colonize beyond its meager foothold here in the northwest of the island chain. Surely the cooler waters it prefers can be found at depth in the main islands, though perhaps the increased depth disfavorably limits available food options.

The Johnston Island endemic “Centropyge” nahackyi is a virtually unobtainable species for aquarists, as its isolated geographic range is off limits to collectors. Occasional specimen do sporadically appear in Hawaiian waters, presumably having drifted over during their relatively long pelagic larval stage with some of the strong offshore eddies which swirl in the area. On a long enough timespan, this might lead to a permanent breeding population, if one doesn’t already exist in some hidden corner of the reefs. A single specimen is reported to have been collected for aquarists, offered by Blue Harbor in Japan. I imagine it wasn’t cheap.

C. nahackyi belongs to a large complex of species related to the widespread Central Pacific Multicolor Angel. Other relatives include hotumatua in Easter Island, joculator at Christmas Island, and debelius from Mauritius. This biogeography is striking for the immense distances which separate all of these populations, with seemingly fertile habitat between them completely devoid of specimens. Clearly these fishes favor oceanic islands, but it still surprises that none are found within the Coral Triangle or the Maldives. 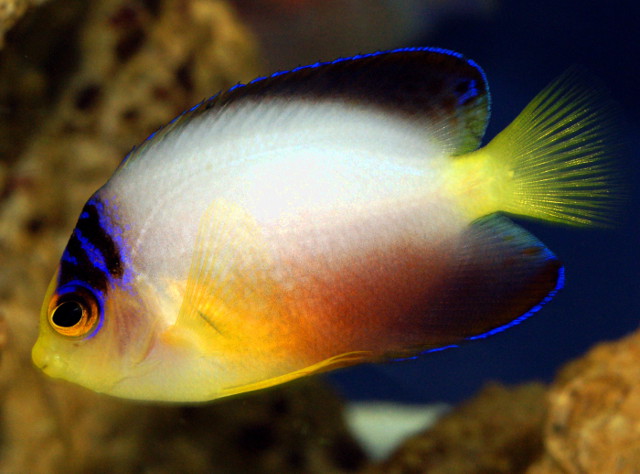 The Multicolor Angelfish, “Centropyge” multicolor, has also been alleged to occur on rare occasions near Kona, Hawaii. In fact, it’s only been found once here, and, assuming this sighting wasn’t a misidentified C. nahackyi, it is likely that the source of this waif was the Line Islands to the south, rather than the Marshall Islands. We can infer this based on the occasional record of another Polynesian fish in Hawaii, the Black Tang (Zebrasoma rostratum). 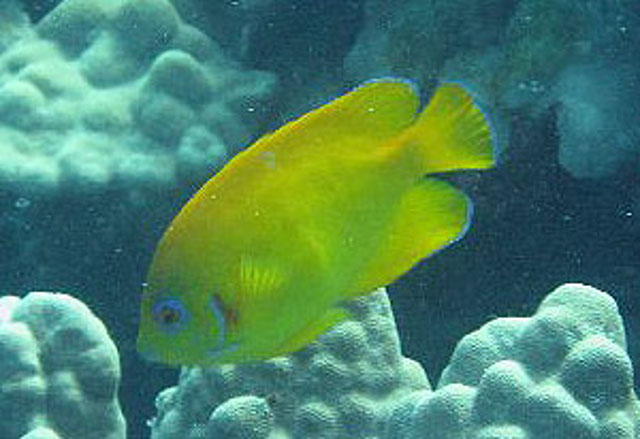 Centropyge flavissima is another rare waif in Hawaii, but, unlike the others discussed thus far, this species belongs in the true Centropyge clade. While considered widespread throughout much of the Central Pacific, it is something of a genetic mutt in much of its range, being known to hybridize extensively with its close relative C. vrolikii. Its genetic stronghold is in French Polynesia, with regions further afield showing increasing genotypic and phenotypic affinities to vrolikii. In all likelihood, it is due to larvae drifting north from the waters around the Line Islands that leads to these Hawaiian sightings, but who knows why this fish has thus far failed to develop a permanent residency here.

Moving on from “Centropyge” and Centropyge, we come to one of the “holy grails” of aquarium fishes—the Masked Angelfish Genicanthus personatus. Despite being placed in a separate genus, the swallowtail angelfishes of Genicanthus are actually thought to be more closely related to “Centropyge” and “Xyphipops” than are the true Centropyge (i.e. those more closely related to C. tibicen). Unlike their dwarf cousins, the swallowtail angelfishes live a zooplanktivorous life in the deep waters of oceanic dropoffs.

The Masked Angelfish is a rare sight in much of Hawaii, as (like the Japanese Angelfish) it has a clear preference for cooler waters. At Midway Island and Kure Atoll, the northernmost extent of its known range, it can be found swimming around as shallowly as 30 meters, but in the main islands it occurs far deeper. Because of this, wild specimens have been mostly unobtainable. Those that have been collected have had mixed success in captivity, but the recent introduction of captive-bred specimens has shown this to potentially be a relatively undemanding species. There are few fishes with such a stark white patterning available to aquarists, so we can only hope that this breeding success continues. 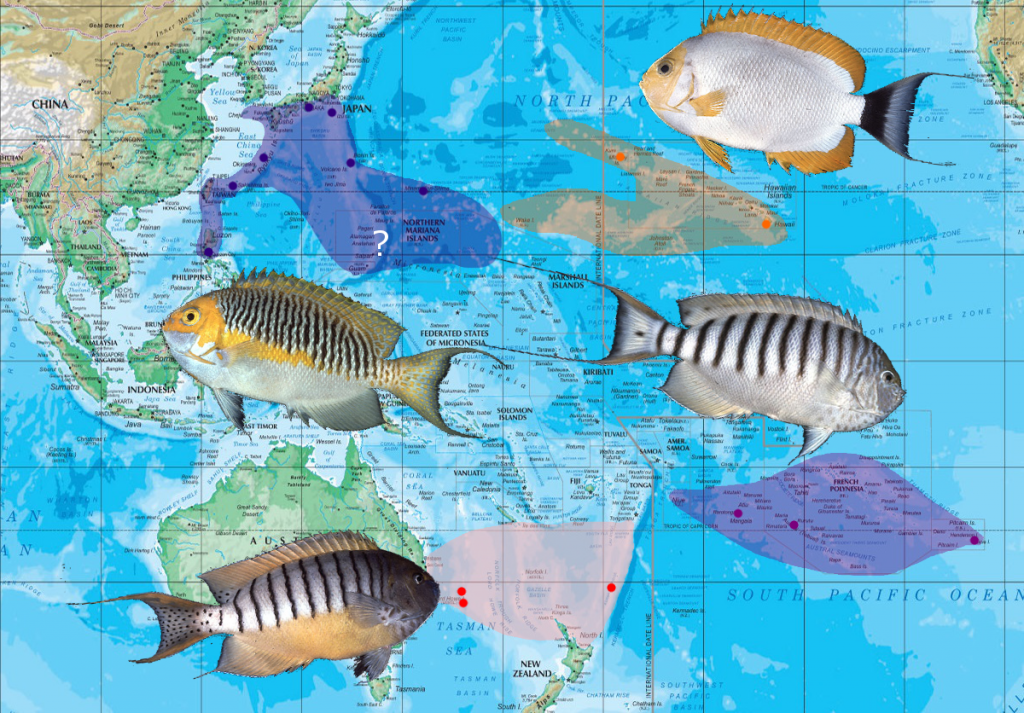 In my recent review of Genicanthus, I discuss the close relationship between G. personatus and the Japanese G. semifasciatus. These, in turn, show an antitropical distribution with G. semicinctus from Lord Howe and G. spinus from Polynesia. Aside from the Japanese-Hawaiian connection which we saw with C. interrupta, it’s interesting to ponder the South Pacific relatives here. How do we explain the vast stretches of ocean separating them? Perhaps the most plausible hypothesis is that these are remnants of a more widespread species which prospered during periods of cooler oceanic water temperatures (i.e. ice ages). Warming, rising ocean waters would drive a wedge into the middle of such a range, leading to the biogeography we see today. Other taxa show similar distributions, for instance, the Striped Boarfish Evistias.

The final resident angelfish to discuss belongs to yet another genus, one which is a close relation to Genicanthus and “Centropyge”. The Bandit Angelfish, “Apolemichthys” arcuatus, is one of the more distinctively patterned fishes, with its sweeping arc of black contrasting against a white and beige backdrop. Taxonomically, this species has been a persistent source of confusion, and at various moments in time it has been aligned with just about every genus in Pomacanthidae. Only recently has genetic sequencing given us a firmer placement for this fish, as a close relative to the unusual “Centropyge” narcosis and colini. Both of these species show relatively tall dorsal and anal fins, giving them a distinctive outline to their bodies, and we see a surprisingly similar shape in the juveniles of arcuatus. 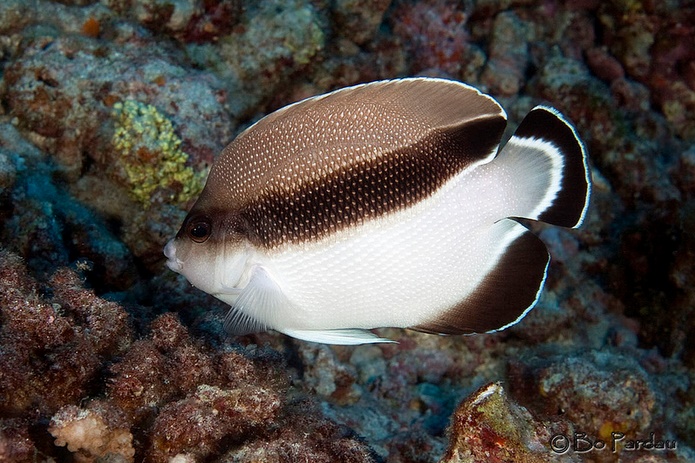 Large specimens lose some of the definition to their stripe. Credit: Bo Pardau

The similarities are lost quickly, as arcuatus reaches almost double the size of its siblings, and its coloration shows little likeness with these smaller, yellow taxa. This unexpected clade (which currently remains unnamed) was placed basally in the phylogenetic tree of dwarf angelfishes, meaning these three taxa diverged a very long time ago (~18 million years). Given their general sparsity, it would seem these are relics, like coelacanths of the angelfish world. The old name Desmoholacanthus has been previously used for the Bandit Angelfish, and I imagine there is a high likelihood it may yet be resurrected in light of these molecular findings.

As aquarium inhabitants, this is not the most recommendable of fishes, being every bit as expensive and finicky as it is beautiful. Newly imported specimens have an obnoxious tendency to ignore food (more so than most other pomacanthids) and develop bacterial infections seemingly on a whim. Proper quarantine should be a requirement before adding one to an aquarium. Cryptocaryon is another major concern, particularly for specimens going into reef aquariums.

P. imperator seen in Oahu, Hawaii. Note that the specimen on the right appears to be the Indian Ocean phenotype, indicating a possible aquarium release. Credit: Ken Weiland & Andy Burnell

It’s somewhat surprising that there are no larger angelfishes in Hawaii, no resident populations of the otherwise widespread Pomacanthus or Chaetodontoplus. I can think of little reason why this should be, particularly in the case of the ubiquitous Emperor Angelfish, P. imperator. This fish is the most widespread member of its family, found from the Red Sea to South Africa and east to Pitcairn and the Line Islands. But it is notably absent from both mainland Japan and Hawaii. We can’t completely write off imperator, though, as it has taken time out of its schedule to make the occasional appearance in Hawaii. The earliest record was a specimen line caught off the coast of Kona in 1948. While some modern sightings could potentially be attributed to aquarium releases, it is almost certain that this early specimen was a waif from nearby waters. More specimens have appeared since then, but never in the numbers needed to create viable breeding populations. And so it seems that, like many of us, it is just a visitor to this tropical paradise.