As summer approaches, it’s once again time to think about heat and your aquarium. So hook up your chiller, and away you go; right? Maybe or maybe not, but in any event, it’s a good idea for every aquarist to have a basic understanding of the factors that affect the temperature his/her aquarium.

In Part 1 of this article, we go over the basics of heat transfer theory as applied to aquariums. In Part 2, we complete the theory and go over some practical aspects including some measurements to verify and augment the theory. As always, there is no substitute of personal observation of your aquarium to assess the health of your animals, especially in light of the inexact nature of heat transfer analysis.

Temperature is one of the most important parameters of an aquarium. Fish and invertebrates 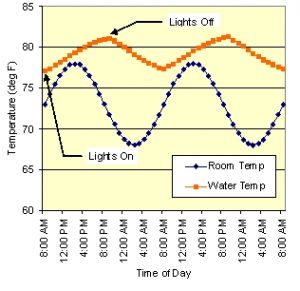 are cold blooded, and therefore, their body temperatures are entirely regulated by their environment. The temperature range requirements of an aquarium depend on the type of animals kept; it can fairly wide for some freshwater fish, or the range can be much narrower for coral species. Also, extremely rapid temperature changes, even within the recommended temperature range, can stress animals resulting in illness or death.

What is heat and how is it related to temperature? Heat, symbolized by Q, is a form of kinetic thermal energy that flows between objects, or within an object, due to a difference in temperature. Heat flows into your tank from the pump, lights, and the heater, of course. Heat flows out of the tank through evaporation, and the chiller, if you are so lucky as to own one. The room temperature can either heat or cool the tank, depending on whether the tank is hotter or cooler than the room. This relationship is shown schematically in Fig. 2.

Figure 2: Heat flows into and out of the aquarium from four basic sources, not including the heater or chiller.

Heat is usually measured in Joules, calories, or British Thermal Units (BTUs). One BTU is the heat required to raise 1 lb of water by 1 F deg, and one calorie is defined to be the amount of heat required to raise temperature of 1 gram of water 1 C deg. Note that 1 “calorie” of food energy = 1000 calories (or 1 kcal) for you fatties. This paper will use mostly English units, but conversions between English and SI units are given in Appendix A.

A material property called Specific Heat, symbolized by c, relates heat and temperature. When we add one BTU to an object, its temperature goes up. The increase in temperature depends on the object’s mass and its specific heat. A material’s specific heat is defined as the amount of heat required to change a unit mass of the material by one degree in temperature. The specific heat of pure water is 1.00 BTU/lb/F, by definition. Seawater is slightly lower at about 0.93 due to its higher density. Multiplying by the density of water, r, and con

verting to gallons (US) gives us the amount of heat needed to increase the temperature of a gallon of water by 1 F deg: 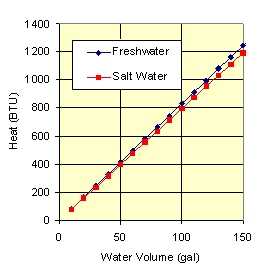 Using the specific heat of water, we can substitute the change in energy with change in water temperature:

At first, equation (3) seems to tell us that the more heat we add on the left side, the hotter and hotter the water gets on the right side. Recall, however, that heat flows between two objects with a difference in temperature. Therefore, as the water gets hotter, say from a hot water pump for example, the difference in temperature between the water and pump actually gets smaller and so does the heat flow. Eventually the net heat flow goes to zero at equilibrium when the water temperature equals the pump temperature. Normally the tank water doesn’t get as hot as the pump. That’s because the net heat flow goes to zero. For aquariums, this usually means that the heat from the lights and pump is balanced with cooling by the ambient room temperature.

Although not always accurate, the concept of heat transfer coefficient will be useful in the rest of our discussion, because it describes how readily heat flows from one object to another. 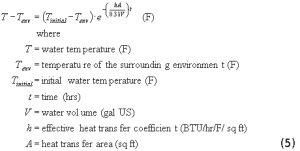 Next, let’s look at the four basic mechanisms of heat transfer into and out of our aquariums: 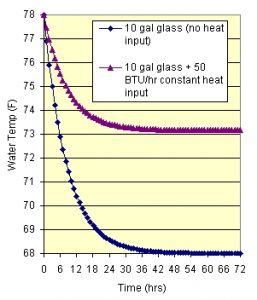 Figure 5: Decrease in water temperature as a function of time due to heat transfer from tank water at 78 F to room temperature of 68 F for a 10 gal glass aquarium. Shown with and without additional 50 BTU/hr heat input.

In each of these heat transfer modes, we strive to express the heat flow, q, in a form of Newton’s Law with an effective heat transfer coefficient to simplify the calculations.

And the effective conduction heat transfer coefficient is given by:

Note that heat flows more readily for larger surface areas, larger temperature differences, and thinner walls. The thermal conductivity, k, depends on the type of material; the higher the conductivity, the easier heat flows through it. The thermal conductivity of materials commonly found in aquarium systems is listed in Table 1. We can see from the table that glass aquariums gain/lose heat five times more quickly than acrylic tanks of the same thickness. Thus, acrylic tanks are generally more stable with sudden changes in room temperature that you might experience during a short term heat wave, as seen in Fig 4.

Convective heat transfer is a little less intuitive. Convection is heat energy transferred between a surface and a moving fluid (typically water or air) when the surface and fluid are at different temperatures. Convective heat transfer may take the form of either forced or natural convection. Forced convection occurs when the fluid is moved by an external force, such as a pump, or fan. Natural convection is caused by temperature variations in the fluid. For example, when air is heated, its density changes, causing the air to rise and be replaced by cooler air that also will heat and rise.

Newton’s Law of Cooling is used to express heat transfer by convection:

The convection heat transfer coefficient, hconv, is generally too complex to calculate for most fish-keepers and thermal engineers. Therefore, typical empirically-derived convection coefficients are often used. For air and water cooling, hconv is generally within the ranges given in Table 2, with the low end representing natural convection and the high end forced convection. As you can see, water is 50 – 100 times more effective in transferring heat than air, and forced convection is about 10 – 20 times more effective than natural convection. For comparison to thermal conduction, a quarter-inch thick piece of glass has an effective transfer coefficient of 29.3 BTU/hr/F/sq ft.

Heat can also be transferred through thermal radiation. All objects emit electromagnetic waves in the wavelength range of 0.1 to 100 microns, based on their temperature. The heat radiates across space to cooler objects that can absorb it. This is how the sun warms the earth and how a fireplace heats a room. In an aquarium, the main radiation heat transfer occurs at infrared (IR) wavelengths for two cases: (1) transfer between the lamps and the water and (2) transfer between the aquarium outer walls and the room, with (1) being the dominant transfer mode.

When DT = T1 – T2 << mean temperature (in Rankin), we can approximate the Stephan-Boltzmann Law with an effective radiation heat transfer coefficient, hrad, like we did with conduction:

For aquarium environments, equation (10) is valid for T1 < 200 F or so, which will suffice for radiation from the aquarium walls and fluorescent lamps, but may not be accurate for those hot metal halides systems.

The transfer function, F1-2, is a unit-less quantity that contains the material emittance and a “view factor” that accounts for the geometry of the two surfaces. The emittance, , varies from 0 to 1 and is a measure of the efficiency of the emitter. The emittance for materials commonly found in aquarium systems is listed Table 3. Higher emittance means higher heat radiation transfer.

Other than polished aluminum, most materials in Table 3 are good emitters and also good absorbers of IR heat (with white paint an exception – its absorptance is about 0.3).

For the case of the aquarium walls radiating to a much larger room, the transfer function is given by F1-2 = e1. Plugging in the numbers at aquarium temperatures gives a radiation heat transfer coefficient that is about the same as the natural convection in air – i.e. not tremendously strong.

The situation is much more complex for lamps. Most bulbs are installed in a housing with a reflector and a glass or plastic cover. Much of the heat generated by bulbs is reflected by the polished reflectors and absorbed by the cover. The cover then re-radiates the heat to the water. Some of the heat from the bulbs is removed by fan-driven convection cooling and also conducted to the housing that is in turn cooled by convection. Ultimately, the primary mode of radiation heat transfer occurs between the lamp covers and the aquarium water. For power compact fluorescent bulbs the lamp cover might get to 100 F or so, depending on the system, ventilation, etc. Metal halide covers might get as hot as 200 F or more.

The best way to evaluate the amount of heat entering your tank is by observing the temperature with and without lights on (more on this in Part 2), but we can get an idea of the magnitude by using equation (9) and making a few assumptions. For instance, if we assume that we have power compact lamps that uniformly heat a plastic cover that spans the entire tank top to a temperature of 120 F, we get about 45 BTU/hr/sq ft of surface area (tank top). That amounts to 63 BTU/hr for a 10 gal tank and 340 BTU/hr for a 100 gal tank.

Evaporation is the poor man’s chiller. I say this because fans are a lot cheaper than chillers. But while evaporation can remove hundred’s of BTUs per hour, chillers can do thousands. Evaporation is most effective in areas with low humidity and when assisted with a fan.

In lieu of knowing the amount of water evaporated, the heat loss can be computed from an empirical expression that is a function of the open surface area, the relative humidity, and the velocity of the air directly above the tank surface: 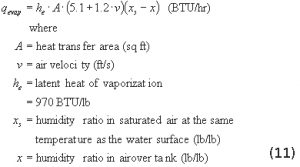 The humidity ratios are obtained from psychrometric charts such as the one in the Reference [3]. Although equation (10) is a bit complicated, it is useful for showing the sensitivity of evaporative cooling to humidity and air velocity. In general, humidity is the biggest factor, mainly because high air velocities are not possible with the smaller fans available for aquariums. Fig 6 shows the moderate amount of cooling as a function of relative humidity of 20%, 50% and 80% assuming zero air velocity. Fans will improve the evaporation rate, but more importantly, they also circulate the air over the tank so it doesn’t become saturated with humidity. 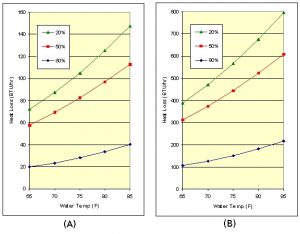 Figure 6: Evaporative cooling for a (A) 10 gal tank and a (B) 100 gal tank for various humidity levels and zero air velocity.

We’ve covered the basics of aquarium heat transfer and the relative importance of the different transfer mechanisms. In Part 2, we will use the concept of thermal resistance to combine the various heat transfer coefficients to compute the complete heat flow through the aquarium and the resultant temperatures. We will also hopefully add some measurements to verify and augment the theory. As I mentioned at the beginning of this article, there is no substitute of personal observation of your aquarium to assess the health of your animals.