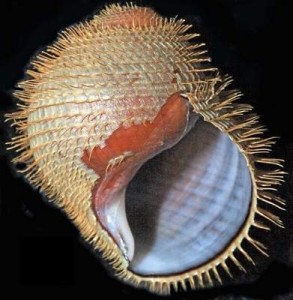 This unbelievably badass little snail, Alviniconcha strummeri, rocks a punk rock-esque spiked shell as it goes about its business around hydrothermal vents of the deep sea. These guys have purple blood and thrive in dark, sweltering acidic environments, pretty rock-and-roll if you ask me. So what better name for them than one shared with a punk rock icon? That’s what scientists at the Monterey Bay Aquarium Research Institution thought when they named A. strummeri after lead singer and guitarist of British punk rock band The Clash, Joe Strummer.

The bottom dwelling snail was one of five deep sea snails recently discovered in the Western Pacific and Indian Ocean. All roughly the size of a golf ball, and found as deep as 11,500 feet, they actually look identical. However, after studying their DNA, researcher Shannon Johnson concluded they were, in fact, separate species.  Johnson published their findings this month in the journal Systematics and Biodiversity. 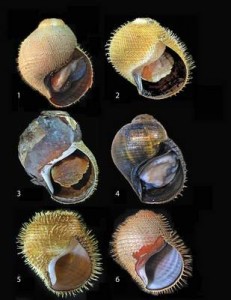 This little rock star joins a few other celebrity species like the Bob Marley crustacean parasite and the Frank Zappa jellyfish. Quentin Wheeler, director of the International Institute  for Species Exploration at SUNY said scientists use this method of nomenclature as a way to draw attention  to their work. “In our culture, it is one sure way to get species noticed. Some scientists frown on the practice, but their science is in trouble, and if a little humor helps, why not?”

We agree 100%. Rockstar or not, this snail is really something wild, and a great little reminder of how little we know of deep sea creatures!