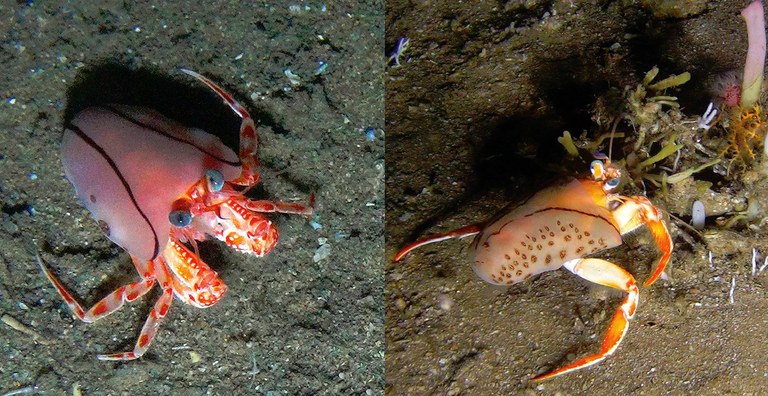 Since 1888, a lone crab species living in an extraordinary symbiosis has been considered to be one of its kind

At the turn of the twentieth century, two independent marine scientists — JR Henderson in 1888, and A Alcock in 1899, described two unusual blanket-hermit crabs from the Indo-West Pacific.

Unlike other hermit crabs, these extraordinary crustaceans do not search for empty shells to settle in for protection. Instead, they have developed a symbiotic relationship with sea anemones to cover their soft bellies. To do this, the crabs use highly specialized chelipeds to pull back and forth the anemone’s tissue to cover their soft bodies and heads whenever necessary — much like hiding under a blanket.

Among the numerous specimens collected during the famous HMS Challenger Expedition in 1874, there were two hermit crab specimens obtained from the Philippines. They amazed Henderson with their unusual physical characters, including an abdomen bent on itself rather than spirally curved, and the lack of any trace of either a shell or other kind of protective structure for their body.

As a result, in 1888, JR Henderson established a brand new genus and new species for it as Paguropsis typicus. The ending of the species name was subsequently grammatically corrected to Paguropsis typica.

A decade later, unaware of the previous discovery, A Alcock stumbled upon hundreds of hermit crab specimens off southern India, which exhibited quite spectacular behaviour. Having observed their symbiotic relations with sea anemones, the researcher also formally described in 1899 a new species and a new genus for his specimens.

However, shortly thereafter and upon learning of JR Henderson’s earlier work, A Alcock concluded that his hermit crab specimens and those of JR Henderson must be one and the same species, so the two scientific names were officially synonymized in 1901 in a publication with his colleague AF McArdle, with JR Henderson’s name taking precedence as required by the principle of priority set forth in the International Code of Zoological Nomenclature.

Now, 130 years later, an international team of scientists, led by invertebrate zoologist Dr Rafael Lemaitre of the National Museum of Natural History, Smithsonian Institution, USA, not only found that A Alcock’s Indian specimens were indeed a separate species, leading to the resurrection of its name as Paguropsis andersoni, but that blanket-hermit crabs are not as rare as previously thought.

In their recent publication in the open access journal ZooKeys, the biologists described a total of five new species and a new genus of closely related blanket-hermit crabs. Furthermore, they expect that other species are to be discovered, since there are many vast marine shelf areas and deep-sea habitats spread across the Indo-West Pacific yet to be sampled.

To develop their exceptional symbiosis with sea anemones, the blanket-hermit crabs have obviously needed just as extraordinary evolutionary adaptations. Perhaps the most remarkable of these are their specialized chelate fourth legs that allow for the crustaceans to effectively grab and stretch the thin-walled body of the anemones to cover themselves. For five of the species, the scientists report and unusual grasping shape for this cheliped that is reminiscent of bear claws, while in the other two the shape resembles ice-block tongs.

Unfortunately, the identity of the sea anemone species involved in the symbiotic relationship with any of the studied blanket-hermit crabs is currently uncertain, and their biology remains unknown.

So far, the genus described by JR Henderson as Paguropsis, contains five species distributed in the subtropical and tropical Indo-West Pacific, and living at depths ranging from 30 to 1125 m. These include the two species discovered in the 19th century, and three new species, one of which, Paguropsis gigas, is the largest known blanket-hermit crab that reaches a body size of 15 cm when fully stretched (a large size by hermit crab standards).

For two of the newly discovered hermit crabs, the new genus Paguropsina is erected to reflect the numerous similarities between the two species and their Paguropsis relatives. The Latin suffix -ina refers to the comparatively smaller size of the two species. Both blanket-hermit species of Paguropsina are found in the subtropical and tropical western Pacific at depth between 52 and 849 m.

“Here there is no shell to play the part of ‘Sir Pandarus of Troy,’ but the sea-anemone settles upon the hinder part of the young hermit-crab’s tail, and the two animals grow up together, in such a way that the spreading zoophytes form a blanket which the hermit can either draw completely forwards over its head or throw half-back, as it pleases,” Alcock once eloquently described his marine discovery.