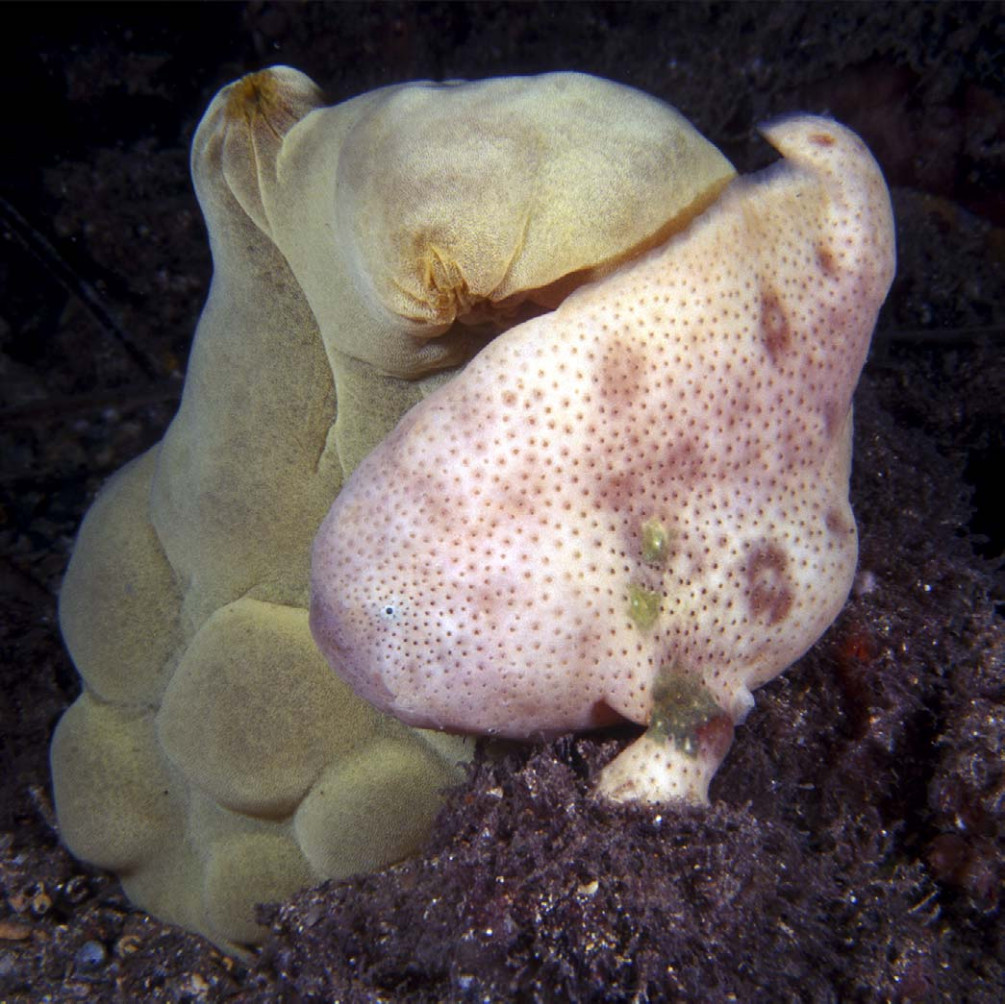 Just in time for Halloween, there’s a brand new species of frogfish which sports a very convincing sponge costume. Described in the journal Copeia, the Narungga Frogfish is the latest addition to the bizarre and fascinating genus Histiophryne. It comes from the temperate reefs of South Australia, whose benthic ecosystems are dominated by large, colorful sponges. Seen against this backdrop, the lumpy, white body of this little frogfish virtually disappears into the sea floor.

Histiophryne narungga might be newly described, but it’s by no means newly discovered. The species had previously been confused with a superficially similar member of this genus from the Coral Triangle, the Cryptic Frogfish (H. cryptacanthus). Both of these species feature a white body covered in small spots, but several subtle morphological differences—fin counts, vertebral count, illium/esca length—serve to distinguish the two, and this is supported further by a sizable genetic distance. Really, the biogeography and ecology of these fishes alone should have made it obvious, as the fish fauna from the tropical reefs of the Coral Triangle and the temperate fauna of South Australia are essentially non-overlapping.

While this new species is known from a broad swath of Australia’s coastline, in depths from 3–130 meters, it has been photographed most often at the Edithburgh Jetty and is named after an indigenous Australian tribe whose lands encompass this region. Further east, the closely related Queensland Frogfish (H. maggiewalker) and Smooth Frogfish (H. bougainvilli) can be found in the subtropical waters of Queensland and New South Wales, respectively. 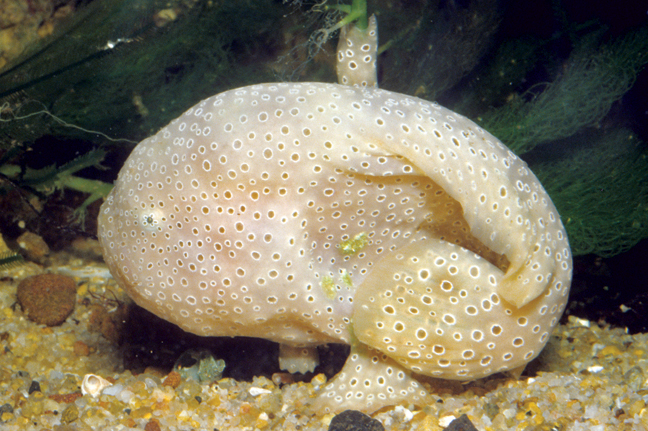 Histiophryne are remarkable creatures with a reproductive strategy that is quite unlike most marine fishes. Their eggs are unusually large (3-4 mm) and are closely guarded by the females, which protect them by creating a pocket formed against their curled body and fins… a marsupial fish of sorts. Instead of the typical pelagic larval stage, the juveniles hatch out as a miniature version of the adults and set about scrambling across the bottom in search of prey.

As is often the case with marine fishes that have foregone a pelagic life history, these frogfishes are poor at dispersing themselves and are prone to speciating allopatrically. This is presumably how Australia wound up with its trio of endemic taxa in the south. And this also has some ramifications for how we understand the populations found in the Coral Triangle. In 2009, a sensational new species, the Psychedelic Frogfish (H. psychedelica), made headlines when it was described from Ambon, and, to date, this is still the only location where it has been encountered. But head a bit east to the Raja Ampat Islands of West Papua and you’ll encounter what appears to be another narrowly distributed (and still unstudied) species, the Honeycomb Frogfish.

Small geographic ranges are probably common among these fishes. With more study, we may ultimately determine that the widespread Histiophryne of the Coral Triangle are really more like species complexes, with an evolutionary history defined by their unorthodox reproductive strategy. These small, isolated populations are naturally at an increased risk of being endangered from habitat destruction or aquarium collection. While generally uncommon in captivity, specimens of several species have been exported from across Indonesia, but the ease with which these can be captively bred offers hope for a sustainable future. It’s noteworthy that these adorable little frogfishes are reported to be quite friendly among themselves and their congeners, with up to a dozen having been kept together without resorting to cannibalism.