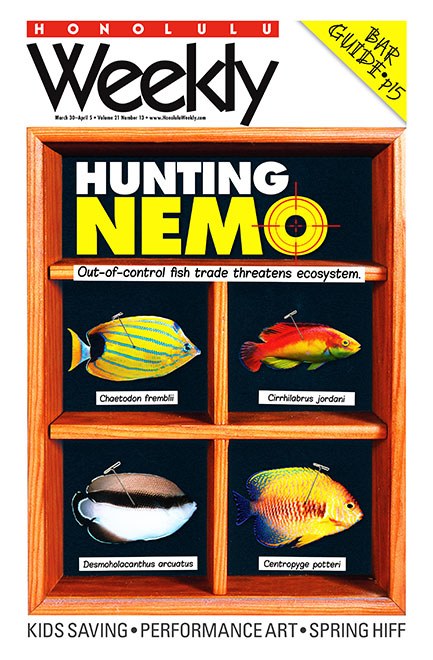 
Below are snippets of Jessie Schiewe’s original article.  Please read the entire article at Honolulu Weekly for the full story, including many arguments and details not summarized below.

“In the past, people would fish within their own ahupuaa and, as a result, you would fish wisely to make sure that you have enough fish for tomorrow,” says Alan Friedlander, a fisheries ecologist for the US Geological Survey. “Survival and subsistence living was paramount then. Now, management regulations have become quite lax and people no longer operate in harmony, but in opposition, to the environment.”

As a result, the aquarium fish industry–a modern industry based primarily on aesthetic pleasure–has grown.

The story goes on to outline the history of the Hawaiian aquarium fish industry:

The aquarium fish industry in Hawaii has existed for more than 50 years and focuses primarily on rare and endemic species and ornamental reef fish. The industry saw its first growth surge in 1959 with the arrival of commercial jet service to Oahu, which allowed for expedient shipping to the mainland. In 1975 alone, the number of commercial aquarium permits issued increased from four to 78, and the number of non-commercial aquarium permits increased from 55 to 218.

The author then questions the ability to accurately monitor fish catches in the aquarium fish industry (section is titled “Sketchy catch reports”) before she discusses the environmental impact of the industry:

“Most of these species die once they are taken out of the reefs,” says Keiko Bonk, a political activist and founder of the environmental organization PONO. “You’re pretty much taking live wildlife from the reef and shipping it off to a destination to be used as decoration [and then] die.”

Fernley disagrees, arguing that the mortality rate for aquarium fish is relatively low.

“If that was the case, we wouldn’t be in business. We have very few mortalities when we ship to the mainland.”

However, it is not so much the fishes’ longevity, but the fact that they are being removed from their natural habitats that is the main issue, Friedlander says. Because the aquarium industry targets juvenile fish, the threat of overfishing looms large.

The article closes by discussing legislative efforts, including the recent HB580 bill Advanced Aquarist reported on a couple weeks ago.