Octopus are extremely intelligent and well known masters of escape in aquariums. Monterey Bay Aquarium Security Officer Clara Nilsen saw what she thought was a banana peel in front of the reef exhibit. Upon closer inspection, Nilsen realized it was actually an Octopus rubescens. 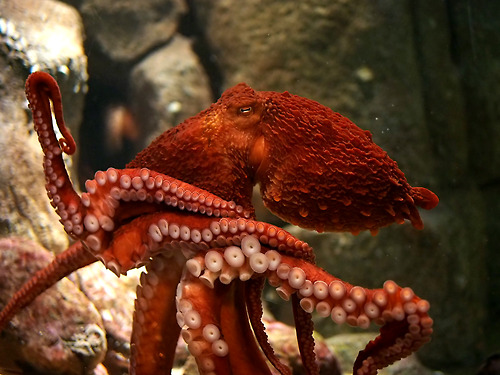 Upon seeing a slime trail leading back to the Shale Reef pool, Nilsen placed the octopus inside the reef. As it turns out, the octopus was not part of the reef pool and Nilsen was actually the first person to see the octopus. The aquarium staff believe that the octopus must have come into the aquarium as a juvenile, by hiding in a rock, and matured in hiding.  The octopus eagerly awaits the opening of  the highly-anticipated “Tentacles: The Astounding Lives of Octopuses, Squid and Cuttlefishes” exhibit opening April 12.