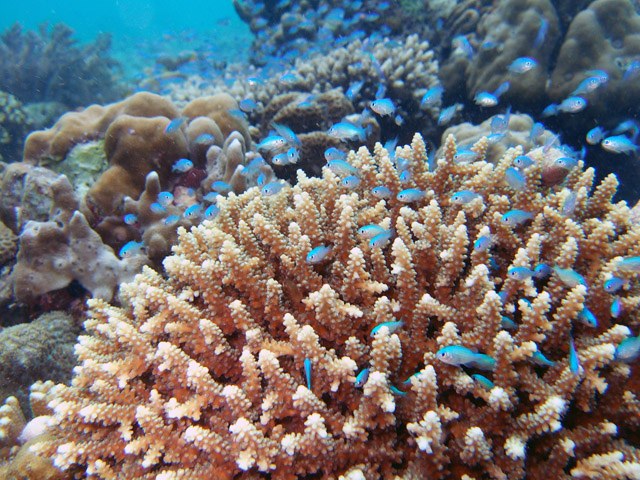 Corals may be responsible for more than the protection of chromis. They may be the origins of mammal immune systems. Photo by Per Edin.

Researchers at the ARC Centre of Excellence for Coral Reef Studies (CoECRS) have found three genes in Acropora (staghorn) corals which show a very fast, strong immune response to the presence of bacteria – and the same genes also occur in mammals, including people.

“It’s early days, but it certainly looks as if key aspects of our ability to resist bacteria are extremely ancient and may have been pioneered by the ancestor of corals – and then passed down to humans in our evolutionary lineage,” explains team leader Professor David Miller of CoECRS and James Cook University.

“Corals are constantly attacked by bacteria in their natural environment, and so have perfected very efficient defences against them,” he says. “These defences apparently work well enough to be preserved in mammals like us, and possibly in plants too. Certain animals in between us and coral, like roundworms and flies, seem to have lost these genes, but our line appears to have retained them.”

The genes belong to a family known as the GiMAPs and have been associated with anti-bacterial immunity in mammals, including humans.

The team made its discovery by challenging living colonies of Acropora with certain chemicals commonly found in the coats of bacteria, and studying which genes reacted across virtually its entire genome of 20,000-plus genes.

“We were quite surprised at how rapidly and strongly these three genes in particular reacted to the presence of bacterial proteins,” Prof. Miller says. “It was spectacular.”

The main goal of the research is to better understand the mechanisms by which corals resist attack by bacteria and viruses – an urgent task in view of a massive upsurge in coral diseases around the world, which researchers attribute to the impact of human activity on the oceans and on coral reefs themselves.

“By better understanding the basis of coral immunity we may first be able to understand what is causing this pandemic of coral diseases and how human activity is connected to it.

“And second, this may lead us to better ways of managing our reefs that reduce the impact of disease, and give corals a better chance of survival during a period of major climatic and environmental change,” he says.

Prof. Miller has also been involved with an international team in a second, equally important discovery – helping for the first time to clarify the molecular process by which corals form their calcium-rich skeletons.

“With the world’s oceans becoming more acidic due to man-made carbon dioxide emissions, the whole basis by which corals and other marine organisms form their skeletons and shells – known as calcification – is under threat.

“Many marine scientists fear that if the oceans become more acidic as we redouble fossil fuel use, many of these lifeforms will not be able to cope – and our coral reefs could literally dissolve before our very eyes,” he explains.

“Understanding how coral forms its skeleton at the molecular level is part of the basic science required to properly understand what is going on in the world’s coral reefs, and to predict the outcome with some certainty. At the moment, while we fear acidification will be damaging for corals, we don’t know how bad – whether it will affect all corals equally, whether it will inflict extensive damage, or will wipe them out completely.”

Prof Miller says that the most important implication of ongoing work which builds on the published study is that, while corals can to some extent cope with ocean acidification on its own, the combination of increasing temperature and acidity are much more damaging. “This is significant, because climate change will result in just those conditions that are most harmful to skeleton formation and maintenance,” he says.

“Corals have been around for a long time, and over hundreds of millions of years the coral lineage has survived previous periods of ocean acidification. However, modern coral reefs are fragile things, and reefs as we know them may not exist in the later part of this century if we do not deal immediately with global CO2 emissions”.

Read more about Coral immunology at our partner website, Coralscience.org.