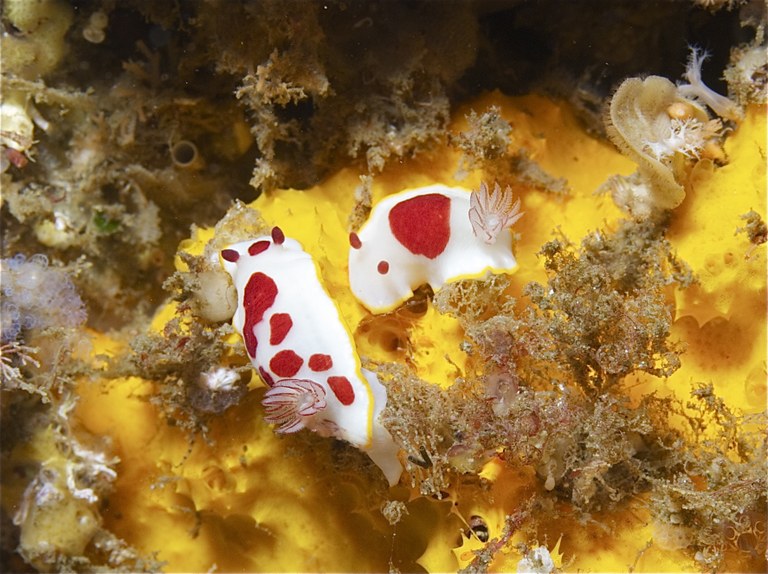 
As it turns out, the bright red spots on this nudibranches are not the reason why reef fish avoid this unpalatable sea slug. It is actually the yellow rim that borders the white body of this sea slug that serves as visual deterrent to fish … at least the Picasso Triggerfish (Rhinecanthus aculeatus) the researchers tested.  The triggers actually paid little to no attention to the red spots (or lack thereof).

Why?  The red spots are highly variable from one nudibranch to the next, so researchers hypothesize reef fish would have trouble recognizing one random red pattern from the next.*  On the other hand, the yellow rim contrasting against the white body is constant among the species.  What good is a warning sign if it isn’t universally understood?

The paper’s finding begs the question: What is the purpose of the bright red spots if not to serve as a display of toxicity?  Perhaps other animals have different or more advanced visual recognition (e.g. humans can recognize that bright markings of any pattern is likely a sign of toxicity).  Perhaps it’s simply camouflage and has nothing to do with visual warning that we’ve all believed.  We really don’t know.  Coral reefs are complicated places with thousands of species having evolved alongside each other for millions of years.

Predator animals have long been known to avoid devouring brightly coloured and patterned prey, and now an international study has revealed more about how they recognise toxic species.

The researchers theorised that there should be little variation in prey species’ visual warning signals, as this could hinder how predators learnt that a particular species should not be eaten, due to being toxic or tasting terrible.

“However, the study — led by UQ’s Dr Anne Winters — provides evidence of how variation in animal coloration can evolve and be maintained,” Dr Cheney said.

The Gonibranchus splendidus displays a consistent yellow rim bordering a white area that has variable red patterns. The species is found on reefs from the Southern Great Barrier Reef to NSW.

“We showed that fish predators (triggerfish Rhinecanthus aculeatus) only pay attention to the yellow border of the colour pattern when learning avoidance of the signal and they pay little attention to the red spots,” Dr Cheney said.

“Down the coast of Australia, the colour and pattern of the nudibranch’s red spots is highly variable between different populations. However, the yellow rim is very consistent.

“Natural selection may act on parts of the colour pattern in very different ways, allowing for the yellow rim to be stable, but the red spots to be highly variable.”

Dr Cheney said many species ate sea sponges, from which they obtained and stored compounds distasteful to predators.

Divers and underwater photographers had long been fascinated with nudibranchs’ diverse colour patterns, she said.